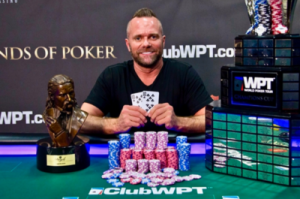 The World Poker Tour (WPT) Legends of Poker $5000 Main Event was concluded on Wednesday 4th of August in Los Angeles. The winner of the event was Aaron Van Blarcrum, after winning a field of 520 entries to win $474,390. Van Blarcrum partakes in different poker tournament sites to play cash games most times. After taking down the WPT Legends of Poker, he might have to reconsider his plans now.

After winning the game, he stated: “It feels great. Normally I just play cash games, and that’s it. I go to the tournaments, but never play the tournaments, so I just decided to give it a try. Winning this is going to make it where I play a lot more tournaments.”

The WPT is in its 18th edition – the first one began in 2002. Last month, Roger Teska won the first event of this year’s season in Los Angeles.  Van Blarcum is the season’s second champion after defeating a field of 520 players.

It is essential to know that the 2019-2020 is getting more global recognition than ever and there more events – not only in the United States – but in Germany, Canada, Russia, and the United Kingdom.

The WPT Legends of Poker results

Van Blarcrum’s Win In The WPT Legends of Poker

The recent WPT Legends of Poker with a buy-in of $5,000 started Aug.31st with 520 entries. At the time when the tournament was completed, Van Blarcrum was the only player with the highest score.

During play, Van Blarcrum won Gueorgui Gantchev heads-up to win the event, after his pocket of tens defeated Gantchev’s pocket of fives. Both of them were in a pre-flop and saw the board run out Q-8-4-3-2, but Ganthchev couldn’t keep up and had to finish second place taking home $306,265 as a cash prize.

Jared Griener, the third-placed player in the chart – also from the United States – is the most accomplished player with over $1.7 million in cash. He took home $226,040.

Van Blarcrum also stated this after competing in the game: “I go to the tournaments but never play the tournaments, so i just decided to give it a try.”

What’s Next on WPT?

The 18th series of the World Poker Tour is growing across different countries across the globe, and the next event takes place in Atlantic City, New Jersey for the $3,500 Borgata Poker Open on Sept. 15th. Then the tour moves to the northeast and remains there for the Sept. 28th WPT at Maryland Live, also a $3,500 buy-in tournament. After that, the WPT moves forward for the $3,500 WPT UK.

There are still lots of action in the World Poker Tour’s 2019-2020 season, and it is just getting started!

Terms and Conditions apply.
This offer is only for new customers who are at least 18 years old.
If you need some help with yor gambling pattern and if you feel
that something goes wrong, please visit begambleaware.com
By Lawrence Damilola|2019-09-06T19:43:20+02:00September 6th, 2019|