Home » Aaron Zang Becomes Triton Million Winner
Previous Next
August 6, 2019
Aaron Zang Becomes Triton Million Winner
Author:
Lawrence Damilola
Hi Guys, I am Lawrence and I started working for YourPokerDream as a content manager since 2019.
My job is it to manage the news section of YourPokerdream; to write different reviews on our partner sites and create new articles. 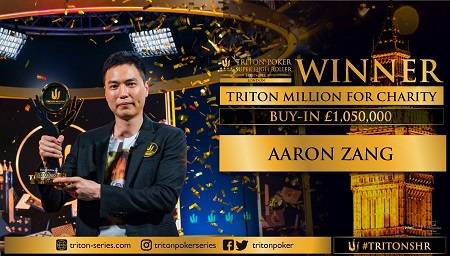 However, the total number of players that contended for the event sums up to 54 in which they created £54 million prize pool with about £2.7 million going to charity. But only one player won, which was Aaron Zang.

Aaron Zang became victorious in the Triton Million Event, and Bryn Kennedy became runner-up in the event. Both players sparked up the contest; Kennedy had more than five chips at a certain point in the game took £16,890,509 to Zang’s £13,779,491. Zang won the title, but Kennedy claimed the significant share of the money by getting about $20,537,000.

After Zang was presented with the award by the co-founder of Triton Poker Paul Phua, he stated: “This feels like a dream come true.”

Zang acknowledged that he made little errors at the final table, but re-focused on his game to achieve his dream. He added: “Bryn (Kenney) played better than me, but I always thought maybe the dream could come true. I am so happy and also very honored to have played against everyone.”

Here are the final table payouts of the event:

The event had lots of aggressive bets on the second round of the final day as Timothy Adams called Alfred DeCarolis. It is essential to know that Adams increased his stack at some point of the event and moved to a good spot against the chip leader Vivek Rajkumar. Furthermore, Adams listed kings against the ace-ten of Rajkumar and DeCarolis. Even though Adams put up this move, he moved to the 8th place.

The next move of the event came from Rajkumar, who tried to outsmart Stephen Chidwick with the dead man’s hand but couldn’t succeed. In return, Chidwick threw all of his time-extension chips to the table which led him to take 4th spot ahead of skillful Rajkumar.

During the event, Rajkumar was tipped to bead Chadwick and Smith as some point, but it was Smith who leads with a surprising jack on the river.

Furthermore, it was Kennedy who exited Chadwick during play after flopping a king Chidwick couldn’t cope with. Kennedy continued on his delightful game – just eight hands later – but Smith was the next victim to be removed by Kennedy’s hand.

Kennedy faced Zang at the final table, but Zang won with a pair of sixes against Kenney’s king-queen and moved all in to become the latest winner of Triton Million.

Terms and Conditions apply.
This offer is only for new customers who are at least 18 years old.
If you need some help with yor gambling pattern and if you feel
that something goes wrong, please visit begambleaware.com
By Lawrence Damilola|2019-08-06T17:41:56+02:00August 6th, 2019|