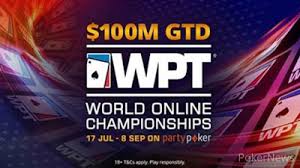 Since both players agreed to a heads-up deal that gave the winner $30,000, each of them was slated to take home more than $1.2 million in prize money. The heads-up competition that followed was exhilarating, as both players had large leads. Oddly enough, there were no double-ups as the vast majority of chips changed hands in the post-flop game.

In the end, Addamo beat the struggling Haxton to claim the victory.

Third place went to Charlie Godwin, who only qualified for this main event through a $109 satellite. Although he made it to the final table as a short stack, he fought his way to third place and showed the world how to turn a $109 WPT satellite ticket into a $620,000 payday.

Sign up at one of the trustworthy poker rooms in the world and dive into the virtual world of PartyPoker. Up to 60% rakeback and fantastic promotions are waiting for you. With YourPokerDream as an affiliate, you also have access to exclusive promotions, VIP deals, and private tournaments.

What are you waiting for?

Terms and Conditions apply.
This offer is only for new customers who are at least 18 years old.
If you need some help with yor gambling pattern and if you feel
that something goes wrong, please visit begambleaware.com
By Marina Taylor|2020-09-26T00:45:15+02:00September 26th, 2020|