Music and Poker: Play on…

Home » Music and Poker: Play on…
Previous Next
November 4, 2020
Music and Poker: Play on…
Author:
AngusD
AngusD switched from pro chess to poker two decades ago and has been professionally involved in the game on numerous levels since the very beginning of online poker, including playing as a poker ambassador both online and at major festivals around the globe. He has written much about the game over the years, and brings to YPD a wealth of experience in all aspects of the poker industry. Meanwhile, his many years on the pro chess circuit (he’s an International Master and prolific author) afford him an interesting perspective on the psychology of poker. 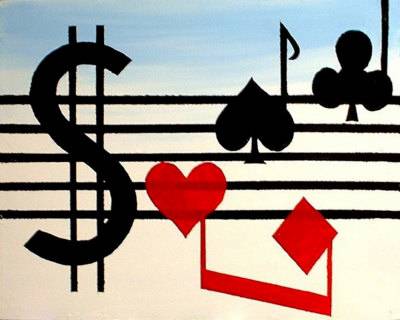 The influence of music while playing poker

They say that music has the power to unite people, so how might Baroque legend Vivaldi’s Four Seasons connect so many of us? The answer is that in hotels, shopping malls, department stores, hospitals, waiting rooms and countless other places, this timeless hit from 1723 has been one of the most popular choices of background music. Chances are that – pre-pandemic – any number of us, in many countries around the globe, could have been enjoying this lifting piece of music all at the same time.

More accurately, in fact, some of us might have been consciously admiring Vivaldi’s talent, while others would barely have noticed, perhaps too engrossed in something else that had a greater pull on our attention – poker, perhaps. But herein lies the magic of a piece of music such as this: it tends to calm us (should we so need to feel calm) and help us feel good about ourselves, or it puts us in a sufficiently restful state of mind that we can get on with something while being more ‘protected’ from distraction. As well as aiding our ability to focus and concentrate, Vivaldi’s delights provide a connection to the brain that acts as a shield to external factors which might otherwise spoil our concentration.

Cut to a cavernous poker room somewhere with a tournament in full swing, and let’s survey the scene… Inevitably, across a sea of tables, we’ll find many players sitting there listening to something (the various forms of devices players bring to the table, including if they listen via earphones or ostensibly industrial strength headphones, will no doubt feature in a future article about table image…).

What they’re listening to is another story, and one that we can go into in more detail but, for now, it appears that if we’re looking to enhance our concentration, then we can’t go wrong with Classical music.

And we don’t even have to be Classical music fans to benefit. Independent research in recent years has consistently found that Classical music improves both our ability to focus and think and, as a result, our performance. For example, research (in various countries) involving students with no previous preference for Classical music found that listening to this particular genre while working or during a test resulted in higher performance levels than other music.

Put down Beyonce and pick up Bach

This is a catchy soundbite to come out of all the research about the psychological benefits of listening to Classical music. In fact, any serious poker player looking to get the most out of the game might want to take such advice seriously because there’s so much more to this than aiding concentration.

Not only does it help us maintain focus, but it appears that Classical music helps keep a level head when we lose which, in itself, is imperative when it comes to poker as being faced with negative results and bad luck, and so on is part and parcel of the game.

As well as leading to the release of dopamine (a hormone associated with pleasure), Classical music can also inhibit the release of stress hormones. Given that nowadays we are all aware of the concept of ‘healthy body, healthy mind’ it’s a no-brainer (if you will…) for poker fans to seek to exploit these additional benefits.

So, what are you waiting for? Let’s put a little culture into our life and simultaneously see the benefits manifest themselves, including at the poker table!

Before we go off and scour the internet for random bits of Classical music, it’s worth noting that not everything is suitable. Listening to Tchaikovsky’s booming 1812 Overture, for instance, complete with cannons to guarantee a maximum assault on the ears, simply won’t work. Even the composer himself hated his own creation, apparently. You might as well listen to thrash metal (and some poker player do…).

Instead try Mozart sonatas, string quartets; Debussy, Fauré… And remember to ditch Beyonce for Bach. The piece now known as Air on a G String is an arrangement made in the 19th century from the Air of Johann Sebastian Bach’s Orchestral Suite No. 3 in D major (apparently). I listened to that and some Strauss while playing a 500-runner online tournament last night and ‘waltzed’ my way to victory (not true, but we can dream…).

Good luck at the tables!

Terms and Conditions apply.
This offer is only for new customers who are at least 18 years old.
If you need some help with yor gambling pattern and if you feel
that something goes wrong, please visit begambleaware.com
By AngusD|2020-11-07T09:38:48+01:00November 4th, 2020|