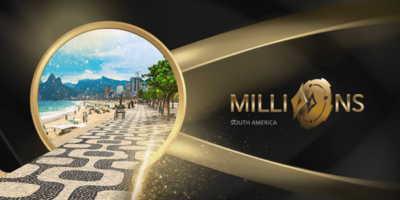 A poker festival that lasted for 12 days during the partypoker reffered to as the MILLIONS South America had a great success as evidenced by the fact that it was considered the largest ever poker festival in the history of poker in Latin America.

The highlight of the series traditionally became the Main Event, which introduced Martin Mathis as the first ever the MILLIONS South America Main Event winner to the world. His path to the top was not easy.  Mathis confronted 439 players and won against Brazilian pro Bruno Volkmann in the heads-up for the pot of $873,700 USD

The path to victory

The Main Event champion is an enthusiastic PP LIVE Dollars satellite player, having amassed $365,350 in  the winnings so far and securing a position as the current top earner in the 2018/19 PP LIVE Dollars Leaderboard. Mathis used his PP LIVE Dollars to get into the MILLIONS South America along with every other MILLIONS events announced this season including the MILLIONS North America, MILLIONS Europe, and MILLIONS World. If he will carry on using the local currency of partypoker room, he will be eligible for the MILLIONS Loyalty Reward

The Winners in Rio

Along with the winner Martin Mathis, there was a big action during the festival with another famous professional poker players that came to this tremendous event. Last year’s the MILLIONS Germany winner Viktor ‘Isildur1’ Blom honored the MILLIONS South America by his presence.

Guillaume Nolet filled up his moneybox with $300,000 as the last player standing in the $10,300 High-Roller, besting a field of 97 entries and a final table which included partypoker Sponsored Pro Anatoly Filatov, 2013 World Series of Poker Main Event Champion Ryan Riess and Faraz Jaka.

The first events of the MILLIONS South America festival also hosted the Inaugural Player Panel Q&A Forum, which was created to provide players with the channel to share their opinion with partypoker representatives openly and thus to influence on the partypoker player policy.

Phil Hellmuth was one of the poker pros that took part in a partypoker event and played in a poker tournament and getting third place and R$28,940 in the $550 Win the Button event. He also showed his unforgettable Samba entrance that will live on in everyone’s memory for some time. If you missed it and would like to see him at his best, you can watch the video here:

Terms and Conditions apply.
This offer is only for new customers who are at least 18 years old.
If you need some help with yor gambling pattern and if you feel
that something goes wrong, please visit begambleaware.com
By Marina Taylor|2019-06-03T12:47:29+02:00April 9th, 2019|