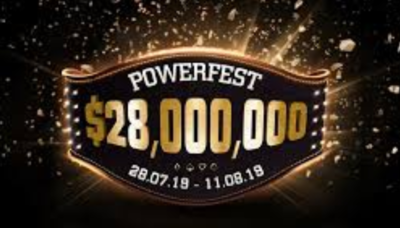 The next powerfest is coming soon

partypoker, one of the leading poker card room with dedicated networks to both French and Italian based players recently unveiled the 10th edition of its website flagship tournament series, POWERFEST. The tournament series will begin from July 28th and end on August 11th, 2019, thus gathering over $28 million as prize money throughout all 275 different tournaments.

The schedule includes a wide range of games in an array of buy-ins for players with different bankrolls. It is essential also to know that this tournament will consist of these latest and old setups: ‘Battle PKOs,’ ‘6-4 Mix-Max’, ‘PLO,’ ‘PLO8’ and ‘Big Antes’, and ‘POWERFEST $320s’.

Additionally, Omaha players have been provided for throughout the tournaments with more than $1.9 million as prize money in the prominent four-card variant plus four dedicated Championship Events.

There will be a total of eight events in this exciting tournament and players can get a bit of every action with a little cost through special edition SPINS games that start from July 14th.

Here is a table that shows the Championship Events slated for August 11th:

Furthermore, about $10,000 Freeroll will be awarded to different seats, satellite, and feeder tickets to kick-start a distinct “POWERFEST Satellite Week” that starts on July 21st to celebrate the milestone of the 10th edition.  A unique daily freeroll campaign that offers $1,000 worth of satellite tickets will also come after the POWERFEST Satellite Week.

Concerning the upcoming POWERFEST, Patrick Leonard, a member of Team partypoker stated: “I am really excited that POWERFEST is coming back round again. The series is always a standout highlight on the online poker calendar and one I make space in my diary for. The 10th edition promises to be extra special too, with a host of promotions lined up to give players the chance to join the action for less, including a $10k freeroll!”

Create one through YourPokerDream and get acess to many exclusive promotions, private tournaments and receive extra rakeback.

Terms and Conditions apply.
This offer is only for new customers who are at least 18 years old.
If you need some help with yor gambling pattern and if you feel
that something goes wrong, please visit begambleaware.com
By Lawrence Damilola|2019-07-20T22:43:13+02:00July 20th, 2019|