The winner of No-Limit Hold’em Only event became known 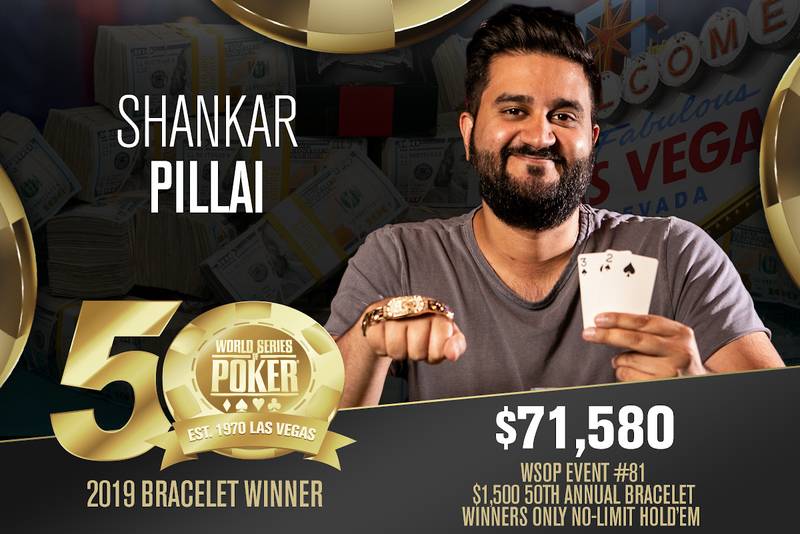 This year, WSOP prepared many surprises for its participants; one of them is a special bracelet winners-only event.

The winner of the event was Shankar Pillai, a professional poker player from New York. However, this is Pillai’s second WSOP bracelet at No-limit-Holdem tables.

During the event, the American player defeated a pool of 185 players and got the $1,500 bracelet. At the heads-up, Pillai faced Michael Gagliano and took home $71,580. Galiano finished second place went away with $44,232 as prize money. Tommy Nguyen finished third.

After his win, Pillai said that he had the best seat at the table. “Tommy had the chip lead and he was the most aggressive by far and I was on his direct left. In my opinion, the other really good player was [Gagliano] and he was to [Nguyen’s] right. So, every time they folded, I had a position on everyone else.”

After the tournament, players shared that this game was unique because each of the players won WSOP bracelets.

Brett Apter and Kevin Gerhart took fourth and fifth place after earning their bracelets earlier in the summer in the $1,500 no-limit hold’em shootout and the $1,500 razz, respectively.

Andreas Klatt was the only non-American among players at the table that night. He finished sixth. He won his bracelet at the 2017 WSOP Europe in a $550 pot-limit Omaha.

Terms and Conditions apply.
This offer is only for new customers who are at least 18 years old.
If you need some help with yor gambling pattern and if you feel
that something goes wrong, please visit begambleaware.com
By Marina Taylor|2019-07-16T11:55:06+02:00July 16th, 2019|