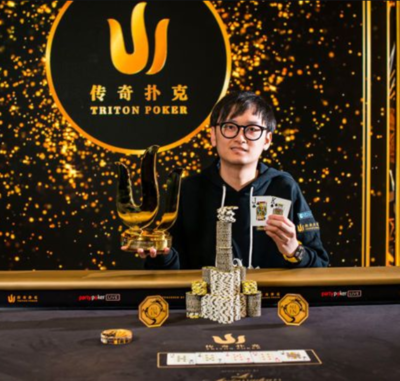 According to reports, the 130 field of entrants is the largest in Triton history. One of the memorable highlights of the Main Event was the fact that Triton co-founder Paul Phua competed against Wia Kin Yong Yong, the son of his business associate, Richard Yong.

Yong had all the confidence that he would win this event; on the other hand, Phua was looking forward to being lucky this time around after finishing second place twice in two previous Triton finishes.

During the event, Phua played well after winning different pots to increase his chip advantage, but even with his king-ten-five-seven-seven and moving all in, Yong triumphed with two pair.

Yong said this after the game: “It feels great to play against Paul; it’s not happened before. I’m just going to play my best and go for the win.” He added: “The brand is growing stop after stop, and we are very lucky to have many friends and professional players who support us. We try to make the event as fun and comfortable as it can be. Players want to come back because of that, and I’ve seen a lot of new faces, maybe 30 percent are new players in London. I’m very, very happy.”

The whole poker scene predicted an all Malaysian finale, but this possibility was no more as Soyza (4th – £1,120,000) got eliminated after Yong flopped the flush with queen-deuce.

The famous player, Ben Heath (3rd – £1,350,000) looked forward to winning the Main Event and follow the triumphant streak of his close pal Charlie Carrel, who won a Triton title a few days ago. But it didn’t go as planned as Yong eliminated him.  Yong faced Phua to seal his victory at the final table.

You are looking for high roller online poker action?

Join our partner sites PartyPoker, Bwin,BestPoker or GGPoker. You will find 24/7 action, many interesting promotions and receive a lot of rakeback.

Terms and Conditions apply.
This offer is only for new customers who are at least 18 years old.
If you need some help with yor gambling pattern and if you feel
that something goes wrong, please visit begambleaware.com
By Lawrence Damilola|2019-08-08T10:33:17+02:00August 7th, 2019|