A Professional Poker Player Gets Arrested For Fraud 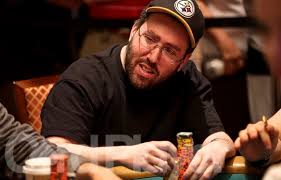 A poker player was arrested recently at the Detroit Metropolitan Airport for swindling travelers.

Michael Borovetz (44), a poker player with $589,958 in career tournament earnings and a World Series of Poker Circuit ring, is expected to go to jail after being indicted on two episodes of fraud. Michael came to travelers, made up sad stories and asked to borrow money. None of the pitiful travelers saw their money nor Michael again. For such a crime, the law provides punishment up to 1 year in prison. The release on bail cost is $ 100,000.

Airport police first began to receive complaints against Borovets back in 2015, but the local police did not manage to capture him.

However, this week, luck finally smiled at law enforcement. They received information that Borovets will make a short stop in Detroit on the way from Seattle to Miami, where, most probably, he had intended to join one of the poker tournament. It is assumed it could be the Main tournament of the Seminole Hard Rock Poker Open series, where the second stage of the starting game day began on Saturday, or other competitions in the SHRPO schedule.

Borovets himself did not hide the fact that in the past, he has already performed such tricks. In 2014, he even admitted his tricks on the TwoPlusTwo forum, when one of the users accused him of cheating. Then he explained his behavior by the fact that he was a ludo-maniac, and thus tried to find means to satisfy destructive passion. He could not control himself and therefore deceived people countless times.

Here is what he wrote under the nickname PSUMike1999:

It seems such a chicken and egg situation made Borovets batting on a sticky wicket.

Terms and Conditions apply.
This offer is only for new customers who are at least 18 years old.
If you need some help with yor gambling pattern and if you feel
that something goes wrong, please visit begambleaware.com
By Marina Taylor|2019-08-23T10:43:03+02:00August 23rd, 2019|