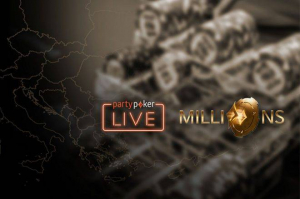 partypoker LIVE MILLION Europe Main Event final table is ready after a showdown in the Day 3 of the event. Charlie Carrel took the lead in Day 3 with102,100,000 chips, and now up for the final table of the Main Event.

These are the current standing for the final table:

It hasn’t been an easy run for Carrel so far – even before Day 3 of the event. Sometimes, he finds himself near the top of the standings and also making sure he doesn’t get eliminated.

One scenario was game in partypoker LIVE MILLION Europe Main Event which had 13 players left, with Carrel included. The game began with Schleser in the small blind, and Carrel three-bet all in. Schleser pushed his 25-big blind stack into the middle, and he called, but Carrel’s pocket threes won against Schleser’s ace-king to avoid elimination. He also won against Marek Blasko to increase his stack to 40 blinds.

There are doubts that Carrel will be happy winning his trials so far, but he must be prepared for the final table of the event to take home the prize money of €1,000,00. So far, it has been an exciting summer for Carrel after winning £50,000 No-Limit 8-Handed event at the Triton Super High Roller series in London, taking home £1,321,000 last week.

partypoker’s Pros in The Event

A couple of partypoker pros involved themselves on its Live MILLION Europe Main Event; they made deep runs on Day 3. Romanello concluded Day 3 with a total of 41,900,000 chips, after entering the Day 3 field as an online qualifier. Saturday 17th of August was Romanello’s first day to play a live tournament.

Another partypoker pro, Dzmitry Urbanovich finished 10th place for €60,000, after being defeated by Paleta’s pocket sevens for quads. The last pro was Bertrand Grospellier. He finished at the 53rd place and went home with €20,000 as prize money.

Looking Forward to The Final Table

Players such as Paleta, Romanello, Romain Lewis, and Sam Grafto are also part of the players to contend in the final table of the Main Event. Paleta got to the final table of the event after getting his stack decline to six big blinds with ten players left and went from the brink of elimination after two big double-ups.

Day 4 has already begun yesterday, and the results will be announced soon.

Terms and Conditions apply.
This offer is only for new customers who are at least 18 years old.
If you need some help with yor gambling pattern and if you feel
that something goes wrong, please visit begambleaware.com
By Lawrence Damilola|2019-08-19T17:09:05+02:00August 17th, 2019|