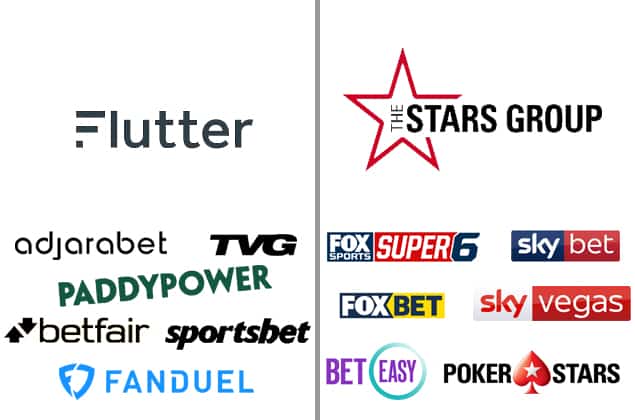 Flutter Entertainment, formerly known as a Paddy Power Betfair, and The Stars Group, well-known as PokerStars, announced a massive collaboration that is going to form a giant gambling company valued at more than £10 billion.

According to the merger deal, Flutter Entertainment would own about 54.64% of the new company, and The Stars Group shareholders will own approximately 45.36% of it.

The new deal will be subject to a shareholder’s vote in the second quarter of 2020; the contract is likely to be completed during the third quarter of 2020. If both companies’ shareholders would approve the merger and go along with all required approvals, the new global leader will appear in the online gambling market.

The new company is going to trade under the Flutter brand name. The merger would deliver pretax cost synergies of £140m a year, along with opportunities to cross-sell products to one another’s customers in international markets and lower finance costs.

The deal is also expected to increase Flutter’s underlying earnings per share by at least 50% in the first full financial year.

Combining customers from both companies will provide a customer base of 13 million, including duplicate accounts, and annual revenue of £3.777 billion.

The massive changes will affect both the geographical areas and product variety. Hardly any of Flutter’s revenue comes from online poker, but 35 percent of TSG’s income comes from PokerStars. However, Flutter expects 18 percent of its revenue to come from retail betting shops – something TSG has none.

Flutter is the name under which Paddy Power Betfair has been trading since May 2019. In August 2015, Paddy Power and Betfair agreed to a £5.8 billion merger. Some years later, they decided to re-brand as Flutter, as a former name of Betfair. In May 2019, the company started trading on the London Stock Exchange.

About The Stars Group

The Stars Group is well-known to everyone who deals with gambling or sports betting. The Stars Group was established in June 2014 when Amaya, at the time headed by David Baazov, decided to buy the parent company of PokerStars and Full Tilt Poker from Isai and Mark Scheinberg for $4.9 billion. As a result, Amaya (now TSG) became the biggest online gambling company in the world.

On Aug.1, 2017, the company launched a re-branding process and changed its name to The Stars Group. Less than a year later, it decided to buy BetEasy and UK-focused Sky Betting & Gaming companies for $4.7 billion

Terms and Conditions apply.
This offer is only for new customers who are at least 18 years old.
If you need some help with yor gambling pattern and if you feel
that something goes wrong, please visit begambleaware.com
By Marina Taylor|2019-10-09T12:57:36+02:00October 4th, 2019|