Sharkscope, the poker tool for all tournaments and SNG players

Sharkscope is a site that specializes in saving all results from all types of poker tournaments. Every Sit&Go tournament and MTT is recorded in Sharkscope, and the data is accessible to everyone. Sharkscope works with every known online poker room in the world and has tracked results for over a decade. All you need to check the results of an online player is the nickname and the site on where he plays.

In addition to the general statistics that show how many tournaments a player has played, the average buy-in, and how much the player has won or lost, there are much more detailed statistics for all players. Each visitor of every site has five free searches every day, allowing them to enter five different player names to see the general stats. This info helps you to recognize if someone is a winning or losing player. If you want more information about different players, or would like to make more than five searches per day, you need a Sharkscope subscription.

The results on all tournaments on PokerStars, PartyPoker/Bwin, the GG Poker Network, iPoker Network, or any other network/operator are stored in Sharkscope. 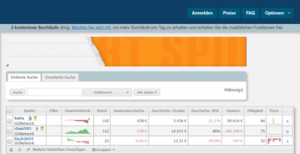 Information: Every player has the right to protect his results and statistics from the public and can request that his stats be hidden at Sharkscope. This is easily possible if you can prove to Sharkscope that you are the owner of a particular nickname.

Here you have four different subscriptions to choose from. Of course, the choice depends on which goal you are pursuing. In general, the silver subscription for $12 per month, which has 150 searches per day is enough for all standard users. But there’s also a $26 gold package that even offers 1,000 searches a day, plus some additional benefits such as HUD, Hand Tracker and an SNG Guide.

All subscriptions can be canceled monthly and you are not tied to a long contract period. It is therefore possible to test different packages and take a look at the advantages, in order to decide whether to extend the subscription or cancel it again.

How to use Sharkscope(Beginner Tutorial)

Yes, it is. Sharkscope is an official and legal tool that only collects data from tournaments and officially receives them from poker sites. Without the consent of a poker operator, Sharkscope would have no possibility to get to the data.

Is Sharkscope available to everyone?

Yes, the platform and database is freely accessible to everyone and also every country.

Does Sharkscope really show all the tournament results of all online poker players in the world?

In fact, Sharkscope has a 99% coverage on all major online poker sites worldwide. All played results in a SNG or MTT are stored and are publicly available. But there are players who block their nicknames at Sharkscope so that nobody has access to any results and statistics. Usually, some of the good players do that so that no one can know how much they have won so far.

Does the use of Sharkscope bring an advantage?

Which Sharkscope subscription makes the most sense?

That is hard to say. A subscription makes sense only if you play regularly and have the goal to earn money by playing at the virtual poker tables. If this is the case, we would recommend you start with the silver Sharkscope subscription. You can always upgrade it if you need more searches or additional tools.

All known payment methods such as visa/mastercard, Paypal and also Neteller and Skrill are available.

Terms and Conditions apply.
This offer is only for new customers who are at least 18 years old.
If you need some help with yor gambling pattern and if you feel
that something goes wrong, please visit begambleaware.com
By Daniel Berger|2020-12-21T12:32:45+01:00October 24th, 2019|