Poker players in the US and around the world renewed their hope and know if they can support the presidential election in 2020 after Andrew Yang pledged support from the Democrats.

US poker players and the global poker market have been frustrated for many years as there has been little progress since Black Friday and the demise of the US online poker. Since then, the online poker industry has been struggling to gain legitimacy from state to state, with just four states having found some regulatory solution, according to Yang: New Jersey, Nevada, Pennsylvania, and Delaware. Online poker is legal only in these four states and different from the international market, leaving you as a US player the option of various offshore sites such as Winning Poker (WPN) Network or the Chico network.

It is also essential to know that the attempts to justify the legality of online poker have entirely been ignored by politics.

Democratic presidential candidate Andrew Yang has spoken out on Twitter over the weekend for nationwide legalization and sees it as an excellent opportunity for additional tax revenues.

Online poker is legal in 4 states. The state-by-state rules are variable and push many players to offshore sites. We should clarify the rules and make it legal in all 50 states. US players and companies would benefit and new tax revenues could be used to mitigate addiction.

Of course, such statements are immensely popular in the US poker scene and everywhere else, so a long awaited podcast invitation from Joe Ingram came along. Since the presidential candidate had already seen similar formats, it did not take long before Andrew Yang responded to Joe Ingram’s invitation and expressed his interest.

I invite you on my show to expand on your tweet related to the online poker in the US. The situation for American players is in need of help. Players are being taken advantage of w/ few safeguards in place.

Please RT for awareness! Thank you for caring. pic.twitter.com/CLylQP81VI

Andrew Yang is currently considered a clear outsider (see picture below), which concerns the pre-election campaign of the Democrats. Nevertheless, he has been able to bring a decent following behind him. His open and unconventional way of addressing certain political issues is well received and should not be written off. 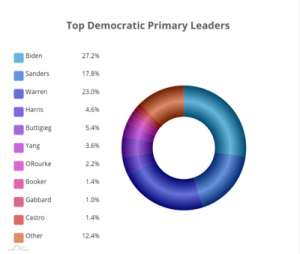 Terms and Conditions apply.
This offer is only for new customers who are at least 18 years old.
If you need some help with yor gambling pattern and if you feel
that something goes wrong, please visit begambleaware.com
By Daniel Berger|2019-11-04T17:15:43+01:00November 4th, 2019|