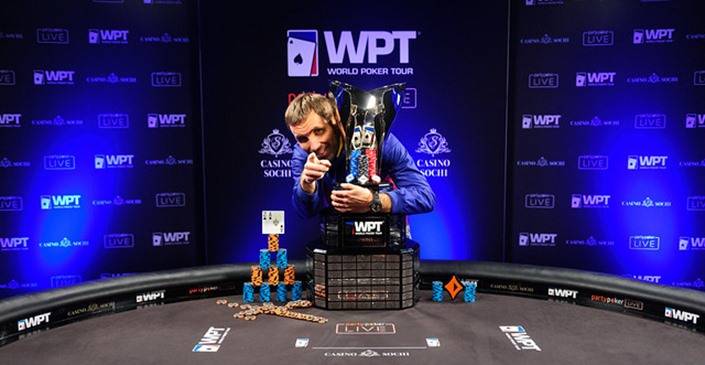 Aleksey Badulin went home with the biggest prize of his life a day ago in Sochi as he won the WPT Russia Main Event; he won a cash prize of $261,571 which is four times more than his total career earnings.

The tournament was organized in conjunction with partypoker LIVE and they had 489 entries at the Casino Sochi resort on the Black Sea, and as the final day’s play got underway, 12 players were left to battle for the grand prize.

The lucky dozen included Anatoly Filatov with almost $20k tied up already whereas, the Team pro of partypoker fell in the 11th position as he ran into Roman Timergazin’s pocket jacks.

Vladimir Lappo, unfortunately, ended in the 8th position as his queens were cracked by rivered trips. Vlada Stojanovic fell to Egor Voitusenko which resulted in his final table sun-run continuing.

The role of the executioner was then taken over by Badulin, he pocketed kings twice, thereby triumphing to set the ultimate contest for the title with Stojanovic. He eventually conquered his opponent thereby securing the trophy in the final hand.

Later on, Muscovite Badulin told WPT reporters of his overwhelming joy and he stated that he was “really happy” with his prize win, I mean, everyone would be happy with such achievements. He ended up winning $261,271 cash prize and he most importantly ended the WPT tournament season seating on the seat made for Champions.

Terms and Conditions apply.
This offer is only for new customers who are at least 18 years old.
If you need some help with yor gambling pattern and if you feel
that something goes wrong, please visit begambleaware.com
By Lawrence Damilola|2020-01-28T07:46:34+01:00January 28th, 2020|