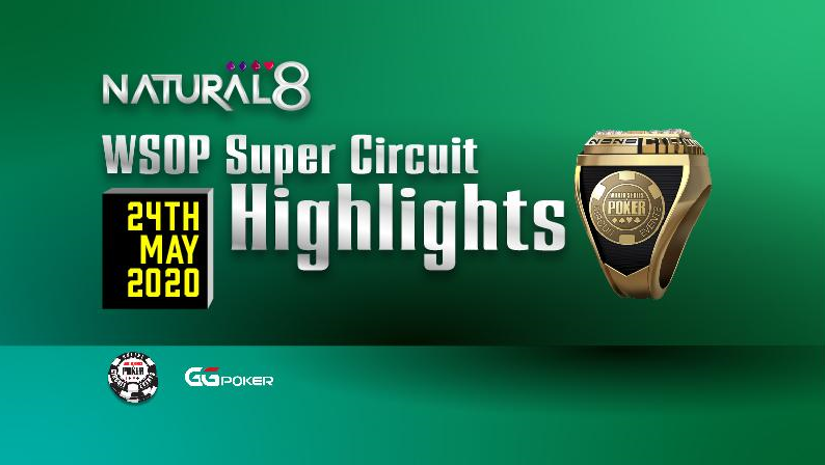 Two Champions Crowned in the 2020 WSOP Super Circuit: Action Gears Up for the Main Event

The World Series of Poker Super Circuit has crowned the next two champions and 13 out of the 18 elusive WSOP Circuit rings have now been awarded. Just one week remains to join the action as the action heats up as we head for the $1,000 Main Event which comes with a $5,000,000 guarantee.

Players from all over the world signed up to battle for the title in Event #12 $200 Monster Stack and Event #13 $400 COLOSSUS. Both tournaments nearly doubled its initial guarantee, which comes as no surprise as the festival has been crushing the guarantees in each event so far.

A total of 4,846 entries created a prize pool of $891,664 and the top 791 spots were paid. Canada’s “ItWasBill” had bubble insurance and took home T$200 while “eatshi123” from Poland was the last participant to leave empty-handed. Russian mixed game player and poker streamer Mikhail Semin cashed for $402.22 and Fedor Holz finished slightly further ahead for the same payout.

Vietnam’s Quang “anh961” Ngoc ended up in 11th place for $4,623.81 while another familiar face of the Asian live poker circuit,  Florencio “tonkatsu&wagyu” Campomanes managed to reach the final table and finished in 6th place which awarded a prize of $20,155.35. Campomanes sits in 5th place of the Philippines all-time money list and is a self-admitted lover of Japanese food, which very well explains his choice of nickname.

On the final table, five players departed in quick succession Andorra’s “5Dinks4all” came out on top of a roller coaster heads-up duel with “Piko1432” from India to earn the WSOP Circuit Ring along with a top prize of $126,949.24. His opponent had to settle for $87,855.92, which is still a very significant boost to the bankroll for such a small buy-in. 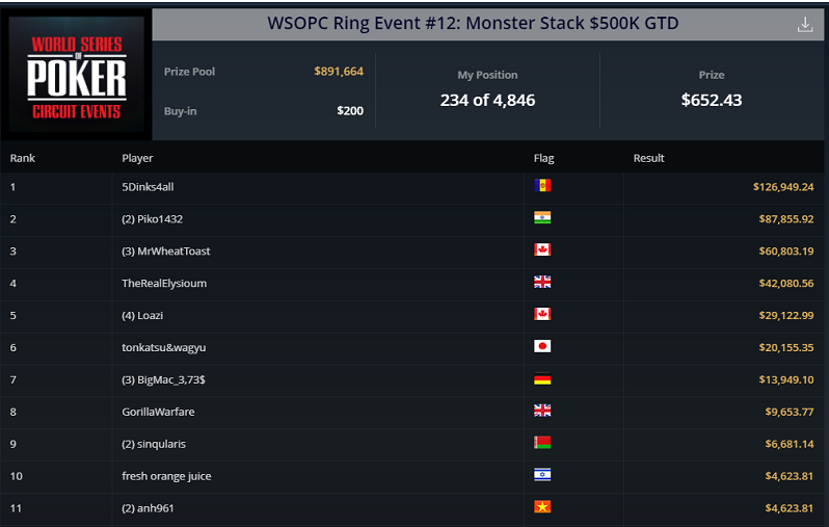 Out of a huge field of 9,603 entries, 1,430 players returned to their seats for the final day to battle for their share of the massive $3,649,520 in prize money. It didn’t take long to burst the money bubble with 1,196 spots paid and it took under nine hours to crown a champion.

Poker streamer Michiel “Easterdamnz” Van Elsacker finished in 15th which came with a payday of $13,467.51 while “coolerbro” also narrowly missed out on the final table and finished in 10th place for a massive payday of $19,328.76. Two Natural8 players reached the nine-handed final table:  “Luizftorres14” from Brazil took home $57,139 in 7th place and Canada’s “KingWilfred” received $117,694 for 5th place.

There were nine different nationalities represented among the top 10 finishers and “WhiteChick” ended up as the winner after defeating “Gius2020” in heads-up, earning $499,339 for his efforts. Runner-up “Gius2020” had to settle for $347,922 while “kimokh” took home $242,423 for third place. That deep run also vaulted “kimokh” into the top 10 of the WSOP Circuit player of the series leaderboard. 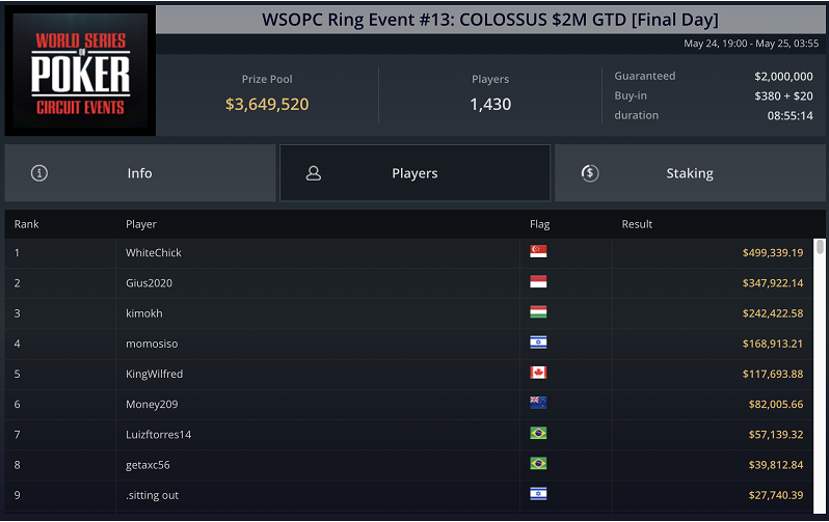 All Eyes Set on the Main Event; Zhu Tops Leaderboard so far

Another five WSOP Circuit Rings will be awarded this week and Natural8 players have the chance to participate in the Natural8 Exclusive WSOP Daily Leaderboard and the WSOP Super Circuit Hero promotion where one player could be awarded with a $500,000 Natural8 Ambassador Package.

The buy-ins of all remaining events starts from $200 in another edition of the Monster Stack in Event #15, and as high as $1,000 in Event #16 PLO Main Event and Event #17 Main Event with the latter featuring a staggering guarantee of $5,000,000. There are still many Day 1s available to secure a stack for the final day and satellites run all around the clock to give poker enthusiasts from all over the world the chance to join the action for less.

On May 26th 2020, Event #14 Deepstack Bounty Hunters will play down to a winner whereas the other four WSOP Circuit rings are all up for grabs on the final day of the festival. The $210 buy-in features progressive bounty prizes and a guaranteed prize pool of $500,000.

A lot of things can still change over the week on the WSOP leaderboard. Justin “PetitFoxx” Zhu is in prime position to secure his seat for the WSOP Circuit Global Championship that awaits the winner of the overall leaderboard.

Zhu fired five entries in Event #12 $200 Monster Stack and cashed for $365.13. While this may not have made profit in the tournament, Zhu took over the lead in the WSOP Circuit leaderboard as he also cashed in the $400 COLOSSUS in 580th place for $1,289.97. He currently has 95 points to his name while “274AS” from Luxembourg follows close behind with 90 points.