Second Edition of the APT Online Series Announced for June 2020 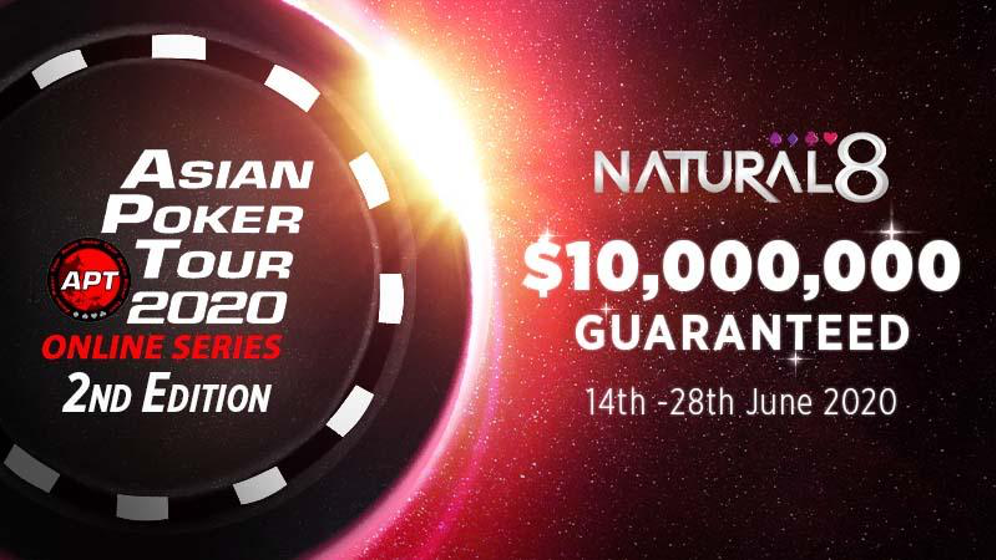 One month ago, the inaugural Asian Poker Tour Online Series on Natural8 paid out more than $4.1 million in prizes throughout 62 events and each winner received an APT trophy. In total, the festival back then attracted a total of 18,555 entries and the largest prize pool was paid out during the $500 Main Event, which saw $578,075 distributed among all players in the money.

Michael “DirtyDuck” Falcon earned the biggest single prize of the entire festival back then after he topped a field of 753 entries in the $800 APT Championships and took home $97,444.51 for his efforts. The Danish expat is a well-known name on the Asian poker circuit and won another side event to top the APT Player of the Series leaderboard, too.

The largest prize pool for a non-featured tournament emerged right at the start in Event 1 Monster Stack which paid out $160,762.50 in prizes, and the $50 Mini Main Event set the pace as the biggest field thanks to 1,299 entries.

Natural8 Team Hot member Michael Soyza was among those to take home a trophy during the first-ever APT Online Series festival along with such known names as Dicky “FloatingWorld” Tsang, Pete “turbopete” Chen, Justin “PetitFoxx” Zhu and Simon “Fireburns” Burns.

However, the overall top prizes will likely be obliterated in the largest guaranteed online series geared towards the Asian poker market on the GGNetwork to date, which will feature more than 200 events (which includes flights to the flagship tournaments). The second edition of the APT Online Series is scheduled to take place from June 14th to 28th, 2020 and will guarantee $10 million in prize pools.

There will be six feature events which all award an exclusive APT trophy to the eventual champion and the top three finishers in the overall leaderboard can look forward to an APT Player of the Series ring and cash prizes from $500 to $1,500. Natural8 will once again host an exclusive leaderboard with $10,000 in cash prizes to reward the most consistent contenders.

The first event to boast a trophy will be the $50 APT Mini Main Event on June 14th which features a guaranteed prize pool of $200,000. One week later on June 21st 2020, two trophies will be awarded in the $500 APT Main Event and the $5,000 APT Super High Roller with the former featuring at least $1 million in cash prizes.

On June 28th, the festival concludes with three trophy events and all eyes will be set on the highly anticipated $800 APT Championship with a guaranteed prize pool of $1 million. Short Deck and Pot-Limit Omaha enthusiasts will also battle for a trophy in the respective $400 buy-is on the final day as well.

An extensive Side Event and satellite schedule will keep poker players from all over the world busy throughout the entire festival to battle for the trophy, cash prizes and bragging rights that come along with it. Players can also make money without even taking part in any of the events thanks to the innovative and transparent staking system.

Terms and Conditions apply.
This offer is only for new customers who are at least 18 years old.
If you need some help with yor gambling pattern and if you feel
that something goes wrong, please visit begambleaware.com
By YPD|2020-06-09T13:21:30+02:00June 9th, 2020|