WSOP 2020 Online at Natural8 and the GGPoker Network in July 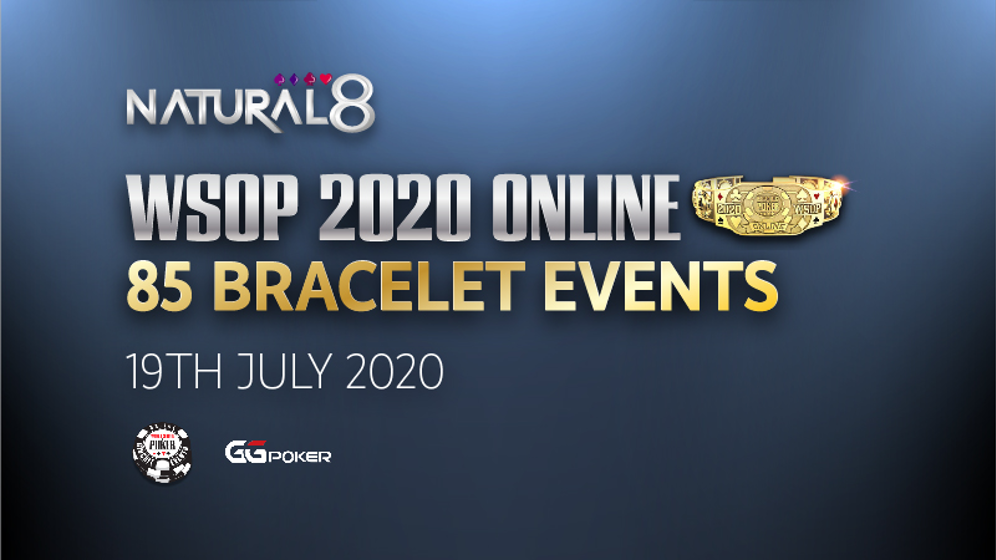 After a very successful maiden World Series of Poker Online Super Circuit in May 2020, the World Series of Poker and GGPoker have further cemented their partnership and will provide poker enthusiasts from all over the world a chance to win poker’s most coveted hardware on GGPoker Network.

The first World Series of Poker (WSOP) Online will consist of two stages and players based in Nevada and New Jersey have the chance to battle for the gold bracelet from the comfort of their own home. Throughout July 2020, the North American WSOP.com poker client will offer one gold bracelet event per day in Hold’em or Omaha variants for 31 events in total.

As of July 19th, 2020, poker players from all over the world can then join the action on GGNetwork and a further 54 gold bracelet events are slated to be given out. The international part of the 2020 WSOP Online schedule will run until September 6th and players can look forward to millions in guaranteed prize pools and plenty of exciting promotions.

The total of 85 online bracelets mirror the initially planned 87 bracelet events of the 2020 WSOP in Las Vegas, however, the current COVID-19 pandemic has put those plans on ice and forged the online partnership, which has already proven to be very successful.

Ty Stewart, Executive Director of the World Series of Poker, is looking forward to what promises to be one of the most-exciting online poker festivals of the entire year. “While we are thrilled to be reopening our venues and optimistic about future offline events, we couldn’t be more excited about deepening our relationship with GGPoker and watching some history unfold online this summer.”

It will be the first time that players outside of the United States can battle for the gold bracelet from their own home and all eligible bracelet events in July 2020 will also award points towards a possible share of $100,000 in prize money added by the WSOP.

The recently completed WSOP Online Super Circuit awarded more than $134 million in cash prizes throughout the entire festival in May 2020 and from that, more than $47 million was through the 18 WSOP Circuit ring events. We can only anticipate that the yet to be announced schedule will feature “buy-in levels and formats that cater to a wide range of players”.

“Bringing this experience online will open the door for a new generation of poker players to feel the rush of competing for the game’s biggest prize,” GGPoker ambassador Daniel Negreanu emphasized in the official WSOP press release.

Poker fans from all over the world can battle against some of their idols and also look forward to an extensive media coverage including virtual “bracelet ceremonies” on Poker Central, as well as live-streamed final tables on the PokerGO platform.

On top of all that, Natural8 players will have the opportunity to take advantage of exclusive promotions beyond the regular satellite schedule with special Freerolls, separate leaderboards and giveaways on social media on the horizon. Stay tuned to all our social media channels for more information as soon as it becomes officially available!

About the World Series of Poker

The World Series of Poker® is the largest, richest, and most prestigious gaming event in the world, having awarded more than $3.29 billion in prize money and the prestigious gold bracelet, globally recognized as the sport’s top prize. Featuring a comprehensive slate of tournaments in every major poker variation, the WSOP is poker’s longest-running tournament in the world, dating back to 1970.  In 2019, the event attracted 187,298 entrants from 118 different countries to the Rio All-Suite Hotel & Casino in Las Vegas and awarded more than $293 million in prize money. In addition, the WSOP has formed groundbreaking alliances in broadcasting, digital media and corporate sponsorships, while successfully expanding the brand internationally with the advent of WSOP Europe in 2007 and the WSOP Asia-Pacific in 2013 and the WSOP International Circuit Series in 2015.

Now its the best time to create a new account via YourPokerDream. Enjoy a 100% up to 600$ Welcome Bonus and receive a lot of additional rakeback through the exclusive promotions and deals of YourPokerDream.

Terms and Conditions apply.
This offer is only for new customers who are at least 18 years old.
If you need some help with yor gambling pattern and if you feel
that something goes wrong, please visit begambleaware.com
By YPD|2020-06-09T13:12:05+02:00June 9th, 2020|