GGPoker reaffirmed its commitment to providing a fair and honest poker playing environment with an announcement on September 30 that it had banned 40 accounts for breaking their terms of service by using banned programs while playing. An additional 40 accounts were also given warnings for possibly breaching the site’s terms of service by using Real Time Assistance (RTA) programs.

RTA is defined by GGPoker as any program or device that assists players in making a decision while a poker game is in play. While most players may be aware of heads-up displays, the most common type of RTA available, these particular cases are a bit more complex and involve the use of “solvers” or programs that provide the correct decision for a player based on Game Theory Optimal (GTO) principles. GTO provides players with an unexploitable poker strategy that cannot be countered by an opponent and is heavily focused on statistics rather than a traditional poker “read”.

The use of these programs has always been prohibited by GGPoker’s Security and Ecology Agreement but this is the first publicly known case of players being banned and funds confiscated. With $1,175,305 being confiscated from the banned accounts, players who were in games against the cheaters will be happy to know the funds will be divided between the victims giving them some solace for their losses.

News of the bans was released on GGPoker’s blog and included a reference to a recent “high-profile RTA case (that) was brought to light.” The poker community is in agreement that this is referring to the recent outing of German poker pro Fedor Kruse by his friends for using a real time poker solver he called the “dream machine” while playing. 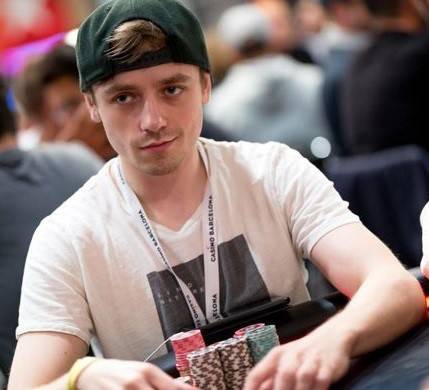 Kruse made a name for himself over the past year with his climb from playing $1/$2 No-Limit Hold’em cash games and then quickly advancing through the ranks to sit at the highest cash game levels of $200/$400 blinds. While an increase in this rapid has occasionally been seen before, a number of poker regulars were suspicious of his results.

After a falling out with two friends aware of his cheating, both of them submitted to PokerStars and GGPoker screenshots of conversations where Kruse admitted to using RTA and candidly admitted he would be “destroyed by regulars” without the illegal assistance of his solver. Photos of his poker set-up showing a separate computer running the RTA solver were included as well.

A number of other high-profile poker players have been mentioned as being included in the ban; however, until a confirmation is received, YourPokerDream will avoid printing those names. Keep checking back though for updates.

Many poker players were wondering how GGPoker was able to uncover these accounts since Kruse appeared to have gotten away with his cheating until he was informed on by his friends. According to the blog post announcing the confiscations, “massive increases in data analysis” are the key to uncovering cheaters. Using both algorithms and insight from experienced poker players, suspicious behavior is investigated and the culprits are uncovered.

GGPoker has made it clear that going forward, there will be no warnings and players found taking advantage of an RTA system will face an immediate permanent ban and confiscation of funds. Players will now even have the opportunity to report directly to the security team examples they find of suspicious play. Either during the actual game or after when reviewing their hand histories via GGPoker’s proprietary Pokercraft hand tracking and replayer software, players can flag hands to be reviewed under a variety of reasons from the use of RTA to more common types of cheating such as collusion between two players. Take a look at the screenshot for how to fill out a report. 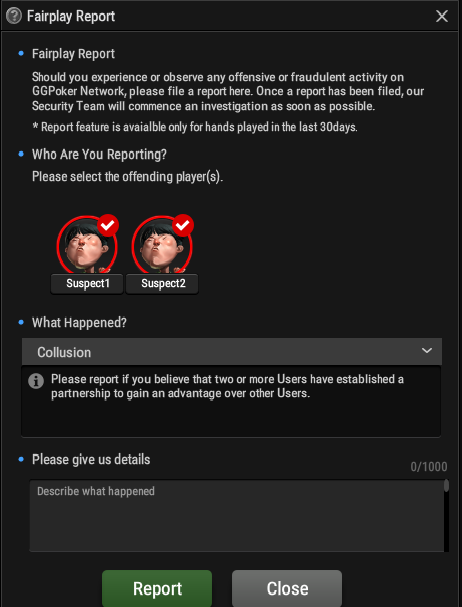 While it is clearly shocking the amount of money involved in this most recent example of cheating, the fact that GGPoker is taking steps to prevent further cheating, and recompensating the players impacted, definitely provides more proof that they are the poker network of choice. If you don’t have an account already at GGPoker, consider checking out their award-winning software and signing up through YourPokerDream where you get access to our exclusive, and market leading, rakeback program through the links below.

Choose one of our two GG partners and enjoy our exclusive promotions and deals. We offer the best GG VIP deals that will increase your profit!

In the GG network you will find 24/7 action on all limits and on all possible variants. Regardless of whether you like to play at the normal cash game tables, like to play fast-fold poker, or the very popular super turbo jackpot Spin & Gold SNG. You can find everything you want to play poker to have unforgettable gaming experience.

Of course there is also a fantastic range of tournaments. GG is a partner of the WSOP and recently hosted the first WSOP online series. There are also numerous other great events, with millions of guaranteed prize money.

Terms and Conditions apply.
This offer is only for new customers who are at least 18 years old.
If you need some help with yor gambling pattern and if you feel
that something goes wrong, please visit begambleaware.com
By Kitch|2020-10-02T17:19:22+02:00October 2nd, 2020|