Home » Poker Online » Poker Strategy » Psychology/Mindset » The Dreaded Downswing
The Dreaded DownswingAngusD2020-11-16T07:45:30+01:00
Author:
AngusD
AngusD switched from pro chess to poker two decades ago and has been professionally involved in the game on numerous levels since the very beginning of online poker, including playing as a poker ambassador both online and at major festivals around the globe. He has written much about the game over the years, and brings to YPD a wealth of experience in all aspects of the poker industry. Meanwhile, his many years on the pro chess circuit (he’s an International Master and prolific author) afford him an interesting perspective on the psychology of poker. 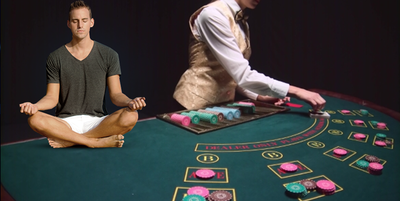 ‘Downswing’ is a word that strikes fear in the most hardened professional. If anyone tells you that this isn’t the case (or – worse – that they never have one), they’re bluffing. Apart from the fact that we tend to be a major cause of our own downfall, another factor beyond our control or influence is sheer bad luck. Sometimes things simply don’t go our way despite our best efforts. If ‘downswing’ is a dirty word, then ‘variance’ is another…

But finding ourselves on the wrong side of a terrible run is part of the game. The problem for new and inexperienced players is that the effects can be very demoralising indeed, with spirits, hope and confidence deteriorating with each successive reverse to the point that it’s easy to understand why some people give up on their quest at the first ostensibly serious hurdle. Assuming that there are sufficient resources to sustain a downswing and subsequently continue on the path to mastery, it would be a regrettable decision to abandon such a fascinating and ultimately rewarding game. With this in mind, here are a few fundamental tips that, while ostensibly obvious, are often ignored even by more experienced players who, inevitably, pay the price (literally).

A break is as good as a holiday, as they say. And as sports and serious games are concerned, this couldn’t be more fitting for poker. Unfortunately, when a dreaded downswing rears its ugly head, it brings with it all sorts of problems, having a negative effect on our ego, pride, confidence and, of course, bankroll. That’s a lot of negativity from which to recover. Consequently, it makes sense to step away from bets, raises, agonizing decisions, bad beats and good old-fashioned bad luck and take a well-earned rest. And while we’re recharging the batteries we’re not losing a single penny at the virtual tables!

Of course, if for a while we’re not spending hour after hour playing poker, then that leaves us time to do something constructive…

Work on your game

Golfers and tennis players dismantle their game in order to rediscover their form. Even football has reached new levels nowadays in the way that the game is scrutinized scientifically to eke out what could be decisive advantages in collective, team performances. Chess is arguably the closest relation to the similarly strategical, simultaneously technical, and psychological game of poker, and just as it’s a continuous learning process with the former, so it’s crucial to study with the latter.

Consequently, constructive introspection is a logical follow-on after making the correct decision to take a break. Compared with, say, 15 years ago, there’s now a wealth of options and resources when it comes to improving our game. Whether it’s books, online tools, lessons, videos, watching experts broadcast their thoughts as they play – never has there been a better time to study, analyze, and prepare for battle.

As well as putting the spotlight on how we play, we also need to be able to better understand ourselves and to what extent our attitude and approach and even our lifestyle can influence our performance at the poker table. Some players simply look at the game in a totally unhelpful way, and often – as much as we need to always be looking at how to better appreciate important aspects of poker – a serious results problem might stem from our outlook, or other psychological factors.

To say that poker is a thinking game only begins to describe what’s involved. If it were merely a matter of remembering charts and odds and so on, everyone and their proverbial dog would be masterfully tearing up the tables – assuming said dog understood position, of course. When we study our game, let’s also remember to study ourselves.

A sensible reaction to a downswing is facing facts, swallowing our pride, and dropping down a level. Successful players are successful because they have the discipline to do exactly this. Such a policy holds even if we’ve taken a break and feel so energized and confident that we can conquer the world. There’s no rush, and if things go according to plan we can move back up and all is good. By stepping down we’re simply demonstrating good bankroll management and limiting our losses should the return to form not materialize as smoothly as we wished.

Eventually, as long as we go about things in the right way, with focus and brutal honesty, we should be able to overcome downswings increasingly effectively as we gain experience.