The mistakes while a Downswing 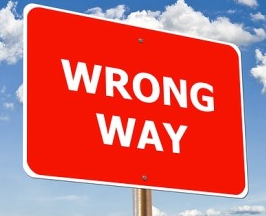 A downswing is in itself a very unpleasant thing, but you can make it much worse by certain mistakes. Which means that your losses are even greater than they should be. In order to protect you from this as much as possible, we will discuss this topic in detail in this article.

Losing confidence in your own game

A downswing can sometimes take a very long time and that gets on your nerves and puts a lot of mental stress there. No matter what you do, whichever hand you hold and how bad the opponent play, you lose. If this lasts for a long time, you begin to doubt in your own play and ask yourself several questions.

Such questions are not asked if everything is going well. You would never get the idea to say that you are just lucky. You assign success to your own ability. The above questions are all questions a poker player should ask. However, during a downswing, most players tends to ask these questions non stop. Since you are very pessimistic in such a phase, the answer to these questions is usually negative.

Bad phases lead to bad attitudes, which negatively affects your own game and the decisions you make at the table. If you go to the table with a shit, because you’re going to lose anyway, you’re not playing your A-Game any more. The biggest mistake is to change your own game in this way, or even stop it altogether, because you have the feeling that you can not beat the limit anymore. A downswing can only be ended by a solid grind. The more hands you play, the faster it is over. You need a good mindset for it and a healthy self-confidence in your game. A downswing will come again and again and he is part of the game.

Strong changes to your own game

On the way to becoming a good poker player, you have to learn a lot and change and improve your own game play throughout. But these changes are based on an objective and accurate analysis. What you should avoid is changing your game due to short term results. Let’s take a very simple example. If we are all-in against a player with AA Preflop, then we have a chance of winning over 80%. Now it is quite possible that you lose 4 times within 5 All-Ins. Although that is annoying, but we would always go with AA all-in, because we know that it has a positive expectancy. The example with AA is of course very clear. Of course there are many other examples that are not as clear as this one. Even if the result is not as short as we hope, it does not mean that we did something wrong. And especially during a downswing, as you know, you run well below the expected value, which leads many players to deviate from your game just because you perceive different things differently. Your mind is unlikely to be reliable enough during a downswing to make extreme changes to your game without negative consequences.

The obsession of your own losses

Seeing your own bankroll shrink dramatically within a few hours is very frustrating. Especially beginners can not handle such situation. They think about it what they could have done or bought with this money. It is important not to mourn your own losses. Of course, it hurts when your own bankroll shrinks. Besides, you can not change it anymore. What is gone is gone! Every session is a reboot and poker is a long session. It will never just go up and every player has to deal with the swing that the game brings. Do not try to win back your money quickly because of the great risk, because that happens automatically when you continue to play your A-Game.

This is the biggest mistake a player can make while he is in a downswing. Although it is clear for everyone that something like 95% it will not work out, but make many players again and again  doing this mistake. The thought of quickly win back your losses on a higher limit and refreshing the bankroll is very tempting. Often, the “I don not care anymore” feeling sets in again and you thinks: “Either I bring the losses back in or I go broke”.

That’s really the biggest mistake you can make. By doing so, you can throw away all the hard work in a few hours. Players have already ended their career unconsciously or made it unnecessarily difficult. The problem is not only that on a higher limit are stronger players, also that it is the worst time to move up. You make your life during your downswing even harder than it already is.

Especially in online poker, this happens very often, as there are only a few clicks and you already sit at a higher limit. This is a bit more difficult for a live player because you do not get to another table so quickly and this aspect may protect you and you may get a clear head again.

Waiting that the downswing finish

Again and again, poker players come up with the idea that you can just sit out downswing. You just play a few hands every day and you do that for two weeks until all is over. Unfortunately, this is impossible. A downswing has no length and you can not predict when it will come and when it will be over. So it does not matter if you play almost no hands for 1 week or 2 months. The chance that the downswing is over now, after two months break is just as big as if you had just continued to play.

A little example from the roulette. Just because 10 red has come, many players think the chance is much higher now the black is coming. Complete nonsense, the chance is still 50:50 even if 39 times red comes.

But if you realize that you are not focused and do not play your A-Game, then of course a break makes sense to recover. But remember, it does not change your downswing.