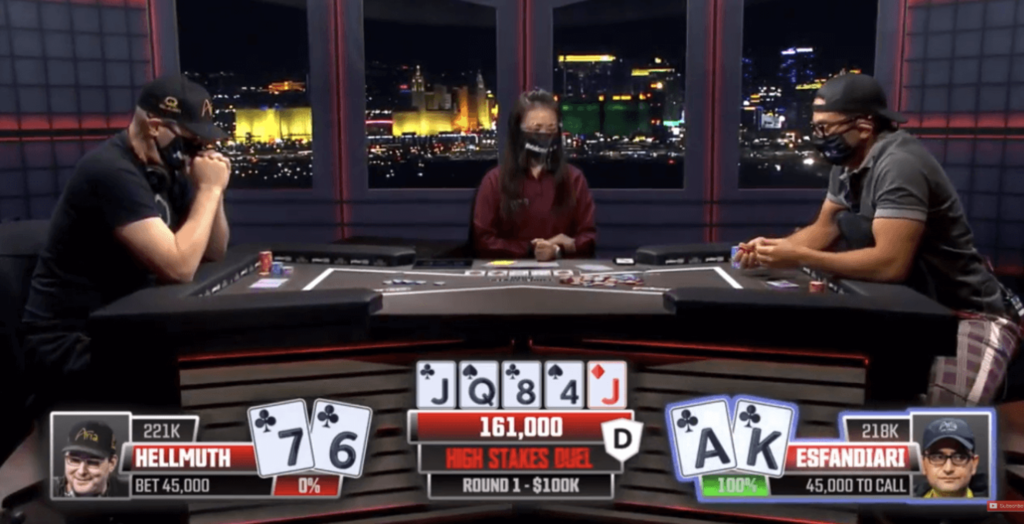 Phil Hellmuth proves himself in heads up and beats Antonio Esfandiari

Phil Hellmuth won the highly anticipated first round of the high stakes duel against Antonio Esfandiari. It was a very exciting and entertaining heads-up match. Antonio Esfandiari has already given Phil another challenge to play against him again in round 2 for $ 200,000. This time he wants to beat the 15-time WSOP bracelet winner and record holder

With bets doubled after each round, the next high stakes duel between Esfandiari and Hellmuth will be a heads-up match worth $ 200,000. We will soon know whether Esfandiari can take revenge or whether he has to defeat Phil Hellmuth again

Phil Hellmuth: „He and I are both titans. We are warriors. We’ll just keep fighting.”

High Stakes Duel is a new and promising poker TV show on PokerGo. In the unique format, the best poker players in the world are battling for a huge prize pool of $ 12,800,000 as wagers are doubled in each of the eight rounds.

In round 1, players buy in for $ 50,000 each, with the winner advancing in round 2. However, the loser always has the option to ask for a re-match first.

“This has been coming for a very long time. Phil and I have had a very big poker rivalry. Even though we’re very good friends off the felt, we really go at it on the felt. This is kind of a dream come true.”

Phil commented after his heads up win as follows:

“I feel like it’s my typical match. I let them run me over, run me over, and then I throw a few big punches back. He played his game. He played really, really good. He ran me over. He might have won 12 out of 13 pots at one point. Now I’m letting him do it knowing eventually I’m going to win a big pot from him. But the big pots I had to bluff. I just never picked anything up when he was going crazy. So then I had to step up and fucking takes the plunge and made some big bluffs.”

Check out the High Stakes Duel Round 1 here!

Terms and Conditions apply.
This offer is only for new customers who are at least 18 years old.
If you need some help with yor gambling pattern and if you feel
that something goes wrong, please visit begambleaware.com
By Daniel Berger|2020-08-05T11:57:56+02:00August 5th, 2020|