Let others know how you really feel about that last hand 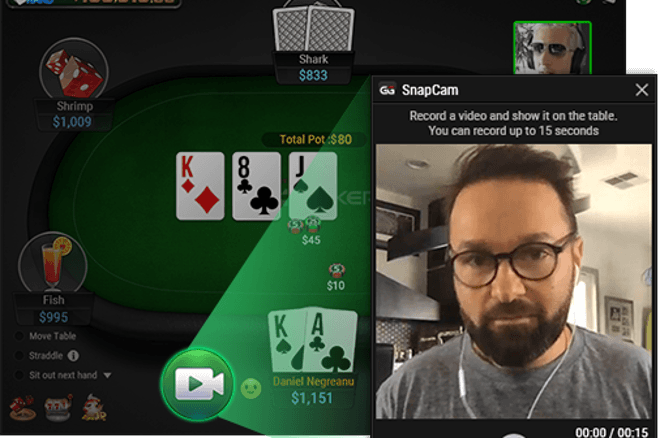 Have you ever wanted to express your frustration at a bad beat and the keyboard chat just doesn’t cut it? No worries anymore for budding poker pros as GG Poker has a solution for you – SnapCam!

Players can now upload a video response of up to 15 seconds using their own webcam with a new icon that appears right on the poker table. Clicking the icon will allow players to use their webcam to instantly react to a large pot win. Once the recording is complete, it is shared with all the other players on the table.

With brick and mortar casinos still mostly closed – or operating under very limited and restrictive rules – SnapCam will bring back some of that live poker excitement even when playing from the safety of your own home. And if you’re video shy but still want to share your excitement, audio-only is an option as well.

Although only available for Windows PC users currently, according to GG Poker, the feature will soon be available for Mac and mobile users as well.

Even before the launch of GG Poker’s SnapCam, their star ambassador, Canadian poker pro Daniel Negreanu was in hot water for comments he made on his Twitch stream during a broadcast of his live play in the WSOP on GG Poker.

Negreanu took offense to a random poster’s comments about his wife, TV poker hostess Amanda Leatherman and went on an explosive tirade resulting in him receiving a ban from the popular streaming site. Negreanu did issue an apology a few days later during another live stream:

“I would like to formally apologize for suggesting that breaking a troll’s teeth and then feeding them to him anally is the appropriate way to deal with an opposing viewpoint.”

While not the most sincere of apologies, Negreanu has promised to tone down his responses and use the block function instead.

Players on GG Poker though will have the option to block other players whose SnapCams they find offensive – or even just annoying. Racist, sexist, and bullying behavior will not be tolerated according to GG Poker and anyone who witnesses that is asked to e-mail them at help@ggpoker.com for further review.

Aside from the trolls who may seek to ruin this new feature, GG Poker is yet again stepping up to the plate with new features to make poker more fun. Why not head over and try it out yourself? But be sure to sign up via our website for the best possible promotions at GG Poker.

Terms and Conditions apply.
This offer is only for new customers who are at least 18 years old.
If you need some help with yor gambling pattern and if you feel
that something goes wrong, please visit begambleaware.com
By Kitch|2020-08-27T20:01:43+02:00August 27th, 2020|