Stock markets around the world are collapsing and Bitcoin is losing almost 50% in value within 2 days.

The COVID-19 virus is causing chaos all over the world at the  moment. Global stock markets are having a turbulent time. DAX lost almost 30% in a few days and Dow Jones also suffered unbelievable losses, and trading on the famous Wall Street was even temporarily suspended on Thursday for fear of even greater losses.

This is due to the fact that people are panicking that’s why stock markets are down. Most countries imposed an entry ban on certain countries, some of them have even closed their borders. Major events have been canceled and the number of people infected is increasing daily.

Many thought that Bitcoin would rise in such crisis, but reality has shown us something different. On March 12th around 1am, 1 bitcoin was still worth just under $ 8,000. Around 1:00 am tonight, the value was at $ 3,900. The coin collapsed by 50% in just 24 hours. The price has since recovered and was $ 5,700 at the time of writing, which is still a loss of about 30%. It can be observed this scenario will continue to change significantly.

Bitcoin development in the last 24 hours (data from Bitstamp.net) 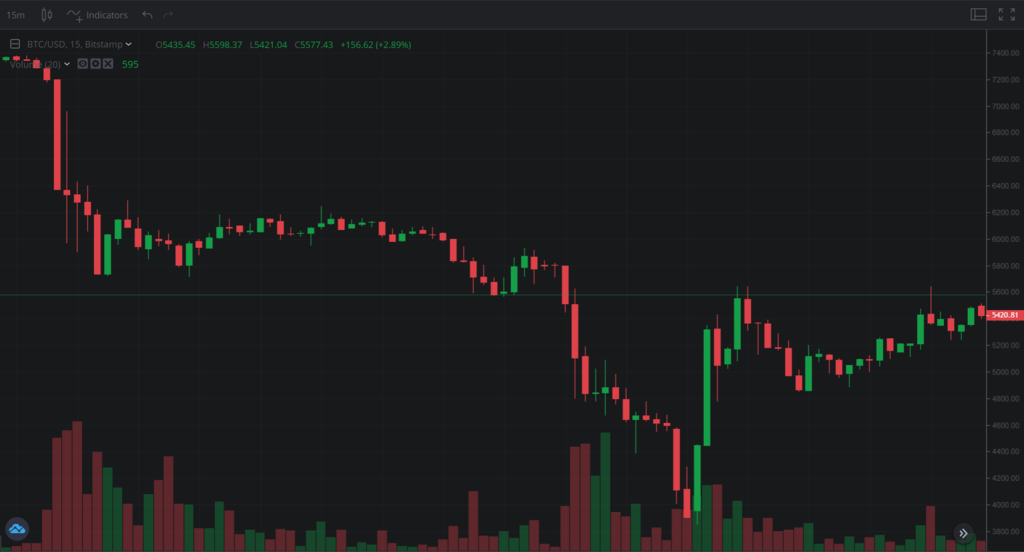 Nothing is currently safe from the corona virus. The price of gold also dropped a lot by almost 4% within 2 days.

It is assumed that the losses in the financial markets will be over soon and that prices will rise again. Realistically, now is the time to make profits, especially when it comes to Bitcoin. It can be assumed that the price will tend towards 10,000 as soon as people’s panic has subsided.

Hold the bitcoins you have at the moment if you are already considering selling everything to minimize the losses. Remain calm and wait in 3-4 weeks because everything will be back to normal. The worst thing you can do is panic, because what we’re seeing on the global financial market at the moment has happened before.

Of course, the corona virus is not a nice thing, but you should not forget that this is just a flu-like virus and nothing more. The measures that have been taken in individual countries are understandable. Nevertheless, there is no reason to panic and to upset the global financial system.

It is also interesting to observe that many poker players have reacted to the slump since yesterday afternoon and paid out at the poker room to get cheap bitcoins. Many skins from the GG Poker Network or the WPN Network offer Bitcoin as a method of payment. And of course there is no cheaper way to get Bitcoin without paying big fees.

Many poker players, just like us, think that the course will recover quickly and you should get started now and not sell. Nobody knows 100% and everyone has to make the decision for themselves.

The last changes of the page “Corona virus also affects Bitcoin” was made by YPD on March 15, 2020