The GGNetwork changes the in-house Fish Buffet Rakeback system of course affects all skins of the network as each automatically participates in the ongoing promotion. Note these changes came into effect for GGPoker and all other skins on the network on February 26th, 2021. 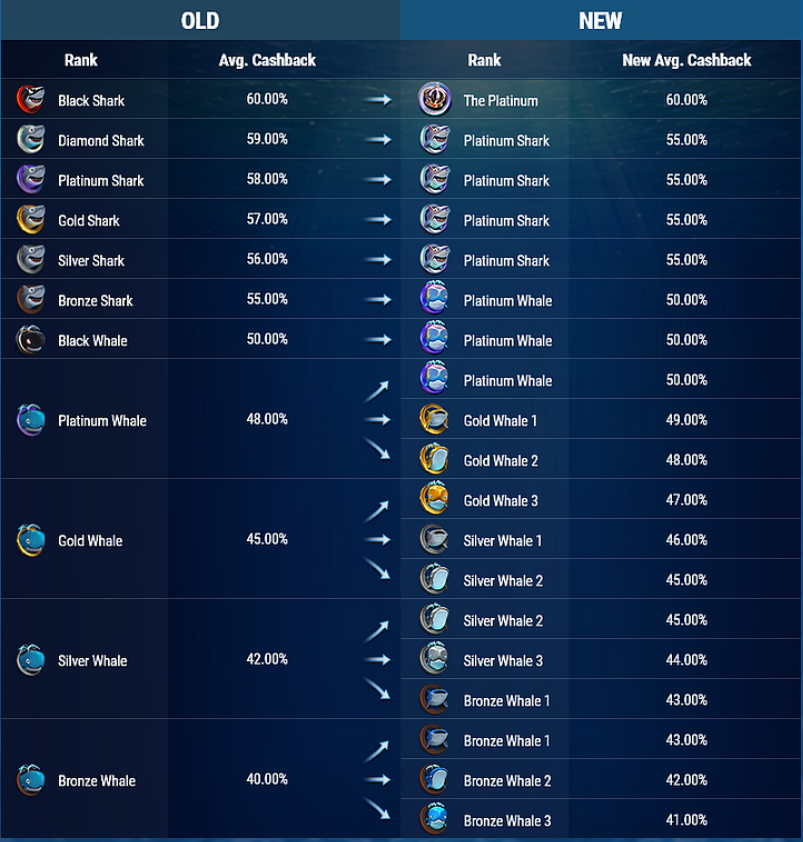 – Players will receive cashback according to the average cashback % of their current rank.

– Bronze Shark and Black Whale players will have their Fish Points carried over.​​​

– Whale players will move to one of three new ranks based on their current Fish Points.​

Fish Buffet system is renewed to reduce the FPs to earn, and the time limit of the top ranks.

– FB rank has been changed to a new rank
– Time limit has been reset and will be activated when FPs are newly acquired
– Unspun wheels rewards have been determined, and those rewards plus any uncollected black rewards have been credited to the player balance automatically

The PVI is the decisive factor in the Fish Buffet

A player can have a PVI between 0 and 2 and this will depend on how much rake is counted and how quickly you collect points for the Fish Buffet.

On average, players will be rewarded 100 Fish Buffet points for every $1 paid in rake and fees. This value may vary based on a variety of factors, such as but not limited to: game type or tournament played, player behaviour at tables, and deposit history.

The levels of expected cashback/rakeback have also been slightly adjusted and changed. 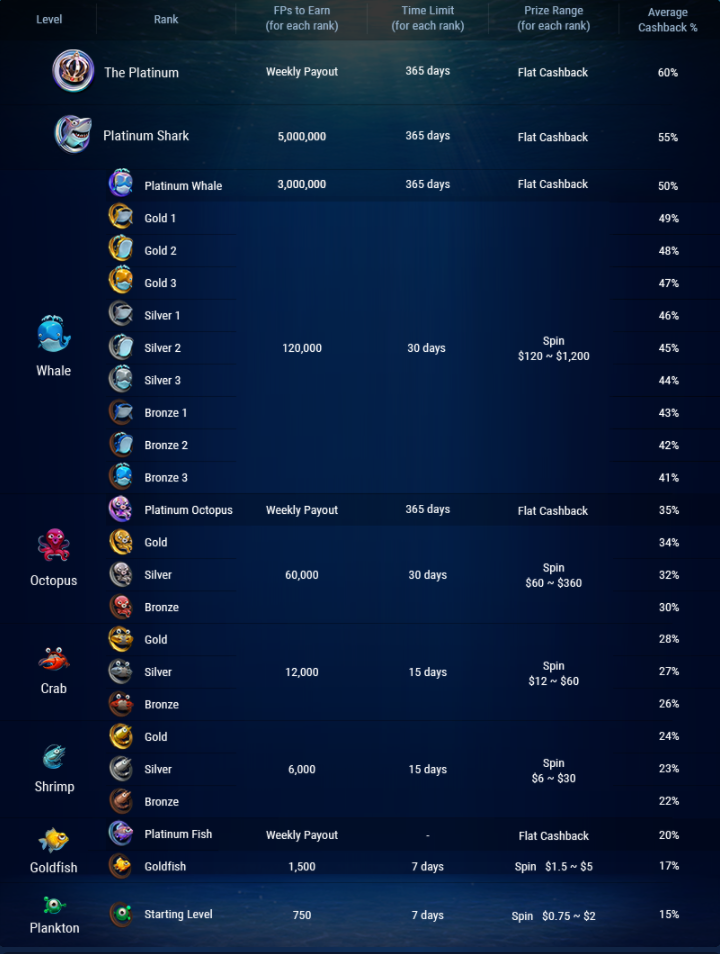 Extreme adjustments have been made here in terms of levels and cash prizes. 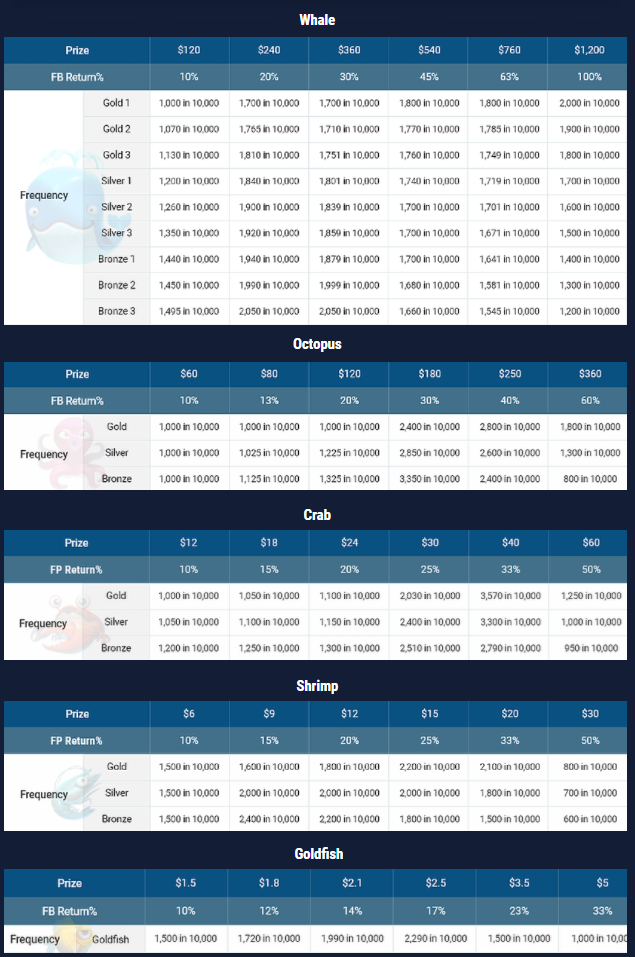 New, however, are the Platinum Ranks, with which you no longer have to turn the Fish Buffet wheel. Receive rewards every week at a fixed rate – no more spins and time limits. Platinum ranks are maintained for a year and require certain points for renewal. 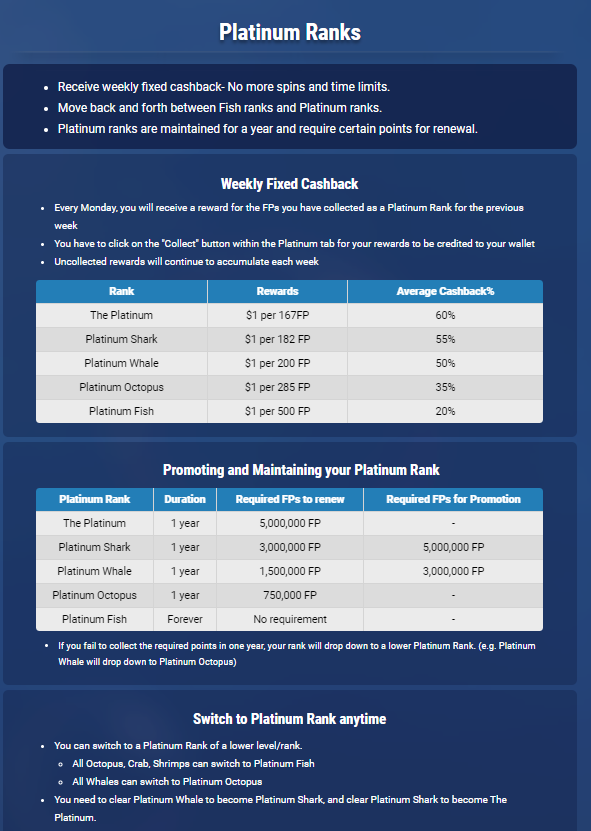 You can switch to a Platinum Rank of a lower level/rank.

YourPokerDream’s comment on the adjustments to the Fish Buffet

It’s difficult to say because, at first glance, not that much has changed. The basic idea has remained the same and the PVI continues to play a major role. The idea with the Platinum Ranks is a good thing, and it allows more players to receive a fixed percentage back every week. It’s definitely considerably better than before. Players on the lower limits now receive a bit more than before because GG slightly adjusted the Fish Buffet ranks.

You have to generate a good amount of rake in order to achieve the big Black Shark or Diamond Shark Status, so nothing has changed here. But it is also justified as this is of course status for frequent players and high rollers.

What GG wants to make clear to us with the changes is the desire to keep players at the tables, and this can be clearly seen in the introduction of the Platinum Ranks, and in the different levels and cash prizes.

In short: The changes are acceptable and definitely interesting, especially for regular players but also for casual players. Players can still earn up to 60% Weekly Cashback, and even those who do not generate much rake have the possibility to reach a Flat Cashback Status.

If you don’t have a GGPoker or Natural8 player account yet, register now via YourPokerDream and enjoy our VIP Deals and exclusive promotions. It’s not possible to get more affiliate value than with YourPokerDream!

The GGNetwork is the perfect place for poker players, with 24/7 action at all limits, players from all over the world, unique software, up to 60% rakeback through the Fish Buffet and fantastic promotions.

Sign up at GGPoker with our bonus code YPD and receive our exclusive VIP Deal, participate in our exclusive $47,500 GGPoker Rake Race, enjoy our $500 Welcome Freeroll, the $2,000 GGMasters Freeroll and many more private tournaments and promotions!

Terms and Conditions apply.
This offer is only for new customers who are at least 18 years old.
If you need some help with yor gambling pattern and if you feel
that something goes wrong, please visit begambleaware.com
By YPD|2021-04-20T17:35:33+02:00February 26th, 2021|