WSOP Main Event gets the green light to proceed 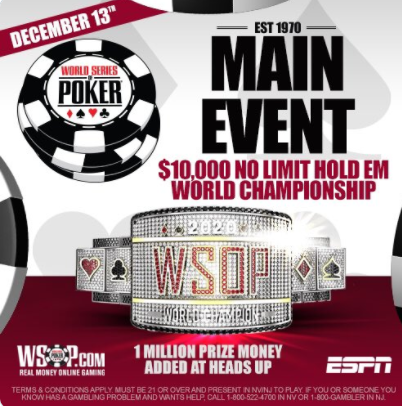 In a year where normal has lost its meaning, the World Series of Poker (WSOP) is looking to keep at least one tradition alive and crown a Main Event champion – even if the format will be quite different from the past and potentially quite profitable with an extra $1 million USD add to the prize pot.

The world’s top poker players, and plenty of recreational players looking for their Moneymaker shot at glory, normally head to Las Vegas’s Rio Casino throughout June and July to try their luck at snagging a gold bracelet awarded to WSOP champions. This year though the coronavirus was surging across the USA around the traditional time the series would kick off, so the decision was made to move the event online. With WSOP.com hosting the American facing events and GGPoker catering to the international player base, 85 WSOP gold bracelets would end up being awarded over the summer.

Even with all the excitement this summer’s online series generated, there was still one element missing. The coveted bracelet that is awarded to WSOP Main Event champion – the poker player considered top in the game for that year and who would join the company of legends such as Stu Ungar and Doyle Brunson. Fortunately, the wait to see how that winner would be found is over as WSOP announced the schedule for this year’s event Friday.

Be Part of history.
2020 WSOP Main Event to begin online on @WSOPcom and @GGPokerOfficial, live Finale tables and a heads up duel for the world championship and the $1M added prize money.
Full details for US and International players here : https://t.co/OcehbGIG93 pic.twitter.com/ViLymRhljP

Unique structure will combine both online and live poker

With many poker rooms shut down or operating a limited capacity, the usual live event that sees over 10,000 players take part won’t be happening this year. Instead, the early stages of the championship will take place online before culminating in a televised live final table. The structure may be different, but the $10,000 buy-in will remain the same, so top prize in the tournament this year could rival last year’s $10 million first prize taken down by German poker player Hossein Ensan.

Since online poker has different levels of legality across the globe, there will be two different options (each with their own prize pool) for competing in this year’s Main Event. Kicking off first is the bracket for international players where the first of three flights kicks of Sunday, November 29 on GGPoker. Players will continue to sit around the virtual felt until they end up with the final nine who will then transition on December 15 to live poker at King’s Casino, in Rozvadov, Czech Republic. Here in Europe’s largest poker room, the final nine will play until a winner is determined.

Right around the time the International bracket is wrapping up, online play will kick off Sunday, December 13 on WSOP.com. Open to Americans playing in Nevada and New Jersey – two of the few US states with legal online poker — play will continue for two days until a final nine is chosen. Those players will return December 28 to the WSOP’s traditional home at the Rio and play in a televised final table. ESPN will be broadcasting the event with host Norman Chad returning to the commentator’s box.

Heads-up tournament to feature USA vs. the World for bracelet

With the two brackets occurring on opposite sides of the Atlantic Ocean, the problem remained on how to determine the true WSOP Main Event Champion for 2020. For this, Casear’s Entertainment (owner of the Rio) and GGPoker, have put up an added $1 million prize pool for a heads-up match between the winner of the WSOP.com and GGPoker tournaments.

“There must be a world champion in 2020,” said WSOP Executive Director Ty Stewart. “Poker’s history is too important. It’s a unique format for the Main Event, but this is a unique year. We want to keep players’ health and safety top of mind and still deliver a great televised showcase for the game we love.”

So on December 30, with but one day left in 2020, the two winners will gather at the Rio for heads-up match not only for the million dollar prize but also to take home the Main Event Champion’s bracelet and a place in the annals of poker history.

Keep a lookout on YourPokerDream as we follow-up during the countdown to the WSOP. In the meantime, check out our review of GGPoker– one of the fastest growing online poker sites – and maybe take a chance at a satellite for your chance at WSOP glory.

Please choose one of our two GG partner sites and enjoy our exclusive promotions and deals. We offer the best GGNetwork VIP Deals that you can find on the market, and at GGPoker you can also enjoy our exclusive $500 First Deposit Freeroll Tournament.

Hi Guys! I am Marc Kitch and one of the Content Managers at YourPoker Dream. As a recreational poker player for over a decade, I’ll bring you the latest in news, views and general advice from the world of online and live poker.

The last changes of the page “WSOP Main Event gets the green light to proceed” was made by on November 14, 2020