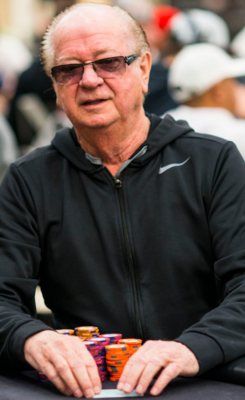 Billy is a professional poker player from the United States. He was born in 1940 in Augusta, Georgia, the U.S. This professional player was successful during his time as he won numerous tournament titles including seven World Series of Poker bracelets.

Baxter started gambling at a very young age. At the age of 14, he learned he had the skills to play pool games. At age 16, saved $5,000 from the money he got while gambling on the street. Two years later, Baxter started playing poker professionally.

In 1975, Baxter moved from Hawaii to Las Vegas Valley, Nevada and there, he started playing poker for a living. In Las Vegas, he hooked up with other professional legends such as Doyle Brunson, Puggy Pearson, and also Stu Ungar.

Furthermore, Baxton is very popular for betting with Stu Ungar to the buy-in for Ungar’s victory in the Main Event of the World Series of Poker (WSOP) that took place in 1997.

No doubts, Baxton is very popular with his poker feats and betting with Stu Ungar, he also gained popularity as a result of the court case of  William E. Baxter Jr. vs. the United States. The Judge of the case ruled that Baxton’s earnings should be categorized as “earned income” contrary to the previous categorization of “unearned income.” The ruling makes sure that the total earnings for American players could be taxable up to 70%. However, the court’s decision implies that American players can now provide equal tax status on their earnings as professional players.

One of the secrets to Baxton’s success in WSOP tournaments is due to the fact that he plays very intelligently. However, he watches his opponents very carefully and then mounts pressure on them to his advantage. He also plays aggressively

Billly Baxter Bracelets at the WSOP

The last changes of the page “Billy Baxter” was made by Lawrence Damilola on June 28, 2019