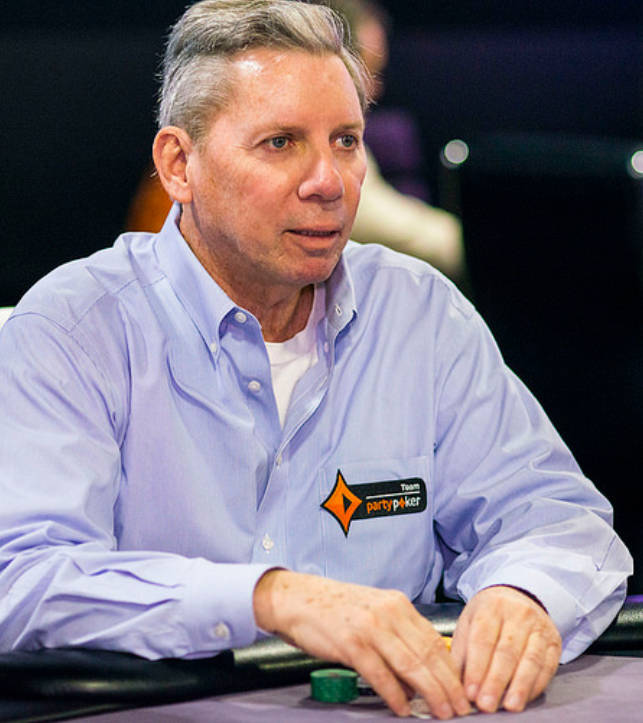 One of the most famous faces, and voices, in poker was Mike Sexton. Born in Shelbyville, Indiana, September 22, 1947, Sexton had a professional poker career that lasted over forty years culminating in his election to the Poker Hall of Fame in 2009 as both a player and ambassador for the sport. Sexton passed away on September 6, 2020 in Las Vegas, Nevada.

While most famous as the voice of the World Poker Tour (WPT), he was a strong and formidable opponent in his own right. Sexton won his first and only World Series of Poker (WSOP) bracelet in 1989 taking down the $1500 buy-in Seven-Card Stud Split for a $104,400 payday.

Sexton often joked he majored in poker while attending college; however, he did graduate with as a public recreation major after having started out in business. Once out of college, Sexton served as a paratrooper with the U.S. Army’s 82nd Airborne Division in 1970. After a short career in sales, he realized poker was a more profitable career choice and made the move to become a professional eventually moving to Las Vegas in 1985.

Regularly seen throughout the 80s and 90s playing on the tables beside such legendary players as Doyle Brunson and Stu Ungar, Sexton’s outgoing and friendly personality was a great ambassador for the game’s early years.

With over $6 million in live tournament cashes alone, Sexton had a poker career worthy of his entry into the Poker Hall of Fame. In addition to his WSOP bracelet, Sexton took down the 2006 WSOP Tournament of Champions event eliminating fellow Hall of Famer Daniel Negreanu in heads-up play. He proceeded to donate half of his tournament winnings to charity, a commitment he continued throughout much of his poker career.

In 2012, Sexton participated in the “Big One for One Drop” WSOP event and finished in 9th position earning him $1,109,333 — the biggest single cash prize of his poker career.

Sexton’s most recent major tournament win came in 2016 at the WPT Montreal. While more famous behind the microphone during these WPT events, Sexton had previously made a couple of WPT final tables only to fall short of the title. According to Sexton, this was one of his proudest tournament victories since the entire broadcast team could watch him take down his first WPT title and the $317,896 cash prize.

Televised poker would not be where it is today without the influence of Sexton. Sexton was the voice of the WPT alongside his broadcast partner Vince Van Patten. For over 15 years, viewers knew they could rely on the duo to cover the world’s best poker players in some of the highest stakes on television. In recognition for his service to the game, the WPT renamed their signature trophy (listing all the WPT champions) as the Mike Sexton WPT Champions Cup.

Sexton retired from the broadcast booth in 2017 to take on a stint as chairman of partypoker. Here he continued his tireless advocacy for expanding the game of poker and started a Player’s Council of top poker pros to help steer the game in a direction of expansion and growth for all.

Sexton published a book describing his own playing style in 2005, “Shuffle Up and Deal: The Ultimate No Limit Texas Hold’em Guide. Much of Sexton’s advice involves giving the game the full attention it deserves. Only by constantly observing his opponents would he know whether a player was acting aggressively or loosely, depending on the stage of the game and his opponents chip stacks.

His most famous quote though sums up the Sexton philosophy of poker:

May all your cards be live and may all of your pots be monsters.

Mike Sexton Bracelets at the WSOP

Some of the best moments of Mike Sexton on TV