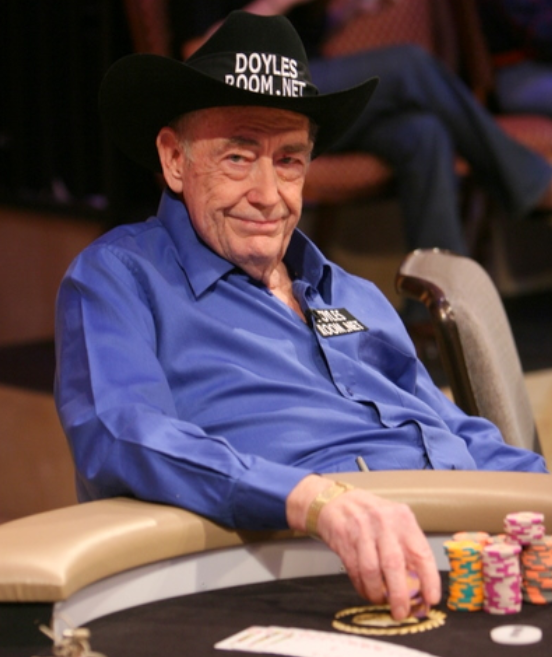 Doyle Brunson is one of the legends of poker. He won the WSOP ten times. Due to his success, he was voted as the most influential person in the world of poker in 2006. No doubts, Brunson’s outstanding moves and great strategies will definitely “woah” you when playing with him one-on-one.

He was born on August 10th, 1933 in Texas, USA. His family was far from riches, but they were cared for. Brunson’s popular name is “Poker’s Living Legend” and despite his current age, he still gives most of his time to playing poker. It is important to know that his triumphs have left a long-lasting impact in the poker world today.

During his high school days, Brunson was a well-known athlete and he excelled in other sports such as basketball. He was also part of Texas’ All-Star basketball team.

He also enjoyed numerous scholarships from reputable universities in the United States, but he decided to attend and play for Hardin-Simmons University in Texas so that he could easily reach out to his parents and siblings easily.

Brunson kick-started his poker career on the streets of Texas. During those times, he would play poker and other gambling games with his best friend Dwayne Hamilton. But most of the gambling games he involved himself with were illegal and controlled by crime groups in Texas. He made a significant amount of money while playing poker on the streets and he left his job to become a professional poker player.

After playing poker on the streets for a while, he shifted his attention to playing poker in Las Vegas, where he spent most of his career there. It is also necessary to know that the World Series of Poker was established in 1970 and Brunson became a regular player and the event.

Brunson is one of the greatest players to win four WSOP tournaments in a row (from 1976 to 1979). In the first two years of this period, he won lots of WSOP bracelets for himself. He has gotten a total of ten WSOP bracelets in his entire career so far.

At the start of 2015, his total earning from the tournaments he played was $6 million. The “Doyle Brunson,” a Texas Hold’em hand named in honour of Doyle’s book warned players to fold when they see this hand: an ace and a queen of any suit.

Brunson has a signature hand popularly called “Texas Dolly” had ten and a two of any suit. He made use of this hand at the No Limit Hold’em WSOP event to complete a full house and to win in two consecutive years in a row.

Brunson has a good reputation on playing with the aggressive style. On the early stage play, he plays very tight at the beginning levels. He also raises with medium strength cards (mid-pairs / unsuited high cards) but never calls with them. He also takes small stabs at pots but backs off when he encounters resistance.

For the mid and final play, Brunson carefully asses the opponent’s tendencies and their stack sizes. After then, he makes use of aggressive and positive poker to put pressure and overtake them.

Doyle Brunson Bracelets at the WSOP

Some of his best TV Moments