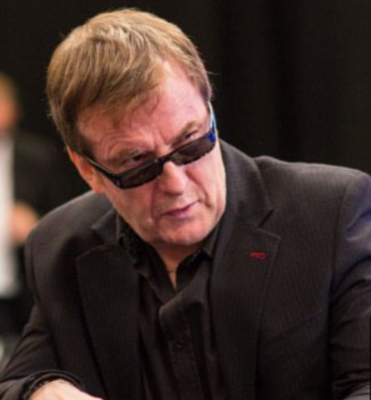 Dave Ulliott is one of the most popular poker players in the world today. By many, he was named a “true godfather” of poker.  However, he has been posthumously inducted into the Poker Hall of Fame due to his feats and achievements in the industry.

Dave Ulliot was born on April 1st 1954 and died from cancer at the age of 61 in 2015. Ulliot won the World Series of Poker bracelet. Additionally, he got the name “Devillfish” due to the fact that he wore an orange-tinted prescription glasses, a leather suit and a gold-knuckleduster rings that read “Devil” and “Fish”. In the World Poker Tour, he won just a title and was at the final table twice; his total money finishes in this event sums up to 8 in total.

Ulliot started playing poker at a very young age and he later learned how to play three card brag at the age of 16, after he was introduced to a casino in Hull.

Furthermore, Ulliot started creating poker games at the back of his shop and dominated the home games. Ulliot met with a poker enthusiasts named Gary Whitaker, a café manager at Wakefield. They two both played poker games. It is necessary to know that Whitaker always placed bets for Dave after he was banned from William Hill’s betting shops for successfully gambling £4,000 up to £70,000.

In 1993, Ulliot first won prize money in a poker tournament. He improved his playing performance and won £100,000 in a two-week period at The Vic.

Ulliot featured on the 1997 World Series of Poker (WSOP) but lost the game and the tournament’s buy-ins. He had to borrow $70,000 more to feature on the game but he lost again – this didn’t deter him to move further. He featured with a buy-in of $2,000 pot limit Texas hold ’em event, where he reached heads-up against fellow Englishman Chris Truby. However, he got his place at the final hand and he recovered the money he lost with an open-ended straight draw and flush draw against his counterpart. It is also necessary to know that Ulliot won $180,310 in the game; this was considered the only WSOP.

After the tournament, Ulliot went on to play in cash games and he was successful in them by winning between $10,000 and 20,000 daily.

In 1999, he Ulliot became one of the players to feature in the first series of the Late Night Poker television series – the first poker show in history to make use of the hole cam technology.

In 2007, Ulliot featured in the 6th season of the WPT Doyle Brunson Classic Championship Event; he earned $674,500.

Ulliot won more than $6.2 million altogether on his time as a poker player, including the coveted WSOP bracelet in a pot limit hold’em event in 1997.

The last changes of the page “Dave “Devilfish” Ulliott” was made by Lawrence Damilola on November 30, 2021