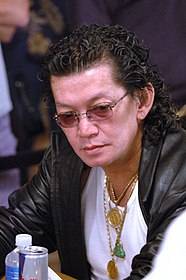 Nguyen was born on October 28, 1962, in the midst of the Cuban Missile Crisis, and two years before President Lyndon B. Johnson signed the Gulf of Tonkin Resolution, which enabled the deployment of US forces in Southeast Asia, more specifically Vietnam. Nguyen was born in southeast Vietnam, but is not known where.

Nguyen has been one of the most active players in professional poker in the past. In the years 2000 to 2004 he reached in more than 100 tournaments in the money ranks. He won the Main Event of the 1998 World Series of Poker and has won a total of five bracelets. His nickname is The Prince of Poker.

Scotty Nguyen is known for saying “baby” and “yeah baby” in the game and is also very emotional. World famous is the phrase “That’s poker, baby” on a very unhappy lost hand (Bad Beat).

In the final hand of the 1998 WSOP Main Event, a Full House (9-9-8-8-8) was dealt on the table. Scotty talked to his opponent Kevin McBride, if he would call, it would all be over (original: You call, gonna be all over, baby). McBride called and the tournament was over.

He is known for his cool comments at the table and also for the fact that he likes to take large amounts of alcohol. At the  50,000$ HORSE event in 2008, Nguyen capped 23-year-old Michael DeMichele heads-up, became  2 million $ richer won a WSOP bracelet, but also received some criticism as Nguyen got drunk on the final table appeared and regularly scolded the other players and the service staff in the casino.

Scotty Nguyen  Bracelets at the WSOP

A few of the best videos from Scotty Nguyen