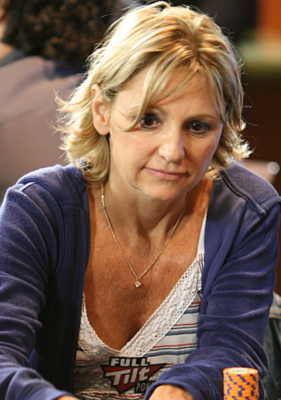 Jennifer Harman is one of the best poker players of all time. She was born on the 29th of November, 1964 in Reno, Nevada. During her poker career, she participated in the World Series of Poker (WSOP) and won the bracelets in open events. No doubts, she is often regarded as one of the most successful women in poker. She is the only woman to win the WSOP in open events.

It is necessary to know that Harman participated in her first World Series of Poker in 2000 and won the event, thus, making it the first time she won the event. She achieved this feat at the No Limit Deuce to Seven Lowball Event, which included professionals such as Lyle Berman and Steve Zolotow. She never had any experience in the game prior to that event, although she received some lessons through Howard Lederer a few minutes before she played the game.

In 2002, Harman featured in the WSOP event again and won, making it her second in a row. She did this at the $5,000 Limit Texas Hold’em event that also featured other professionals such as Mimi Tran, Humberto Brenes, and Allen Cunningham. However, Harman is widely regarded as the first woman to win 2 WSOP bracelet in open events – the others are Vanessa Selbet (2012) and Loni Harwood (2015).

In 2004, Harman stayed away from poker a bit just to have her second kidney transplant. This was a problem she had a long time ago. It is also necessary to know that when she came back, she finished at the 4th place at World Poker Tour Five-Diamond World Poker Classic 5th in the inaugural Professional Poker Tour event, and 2nd in the WSOP Circuit Championship that took place at the Rio.

Harman is the only woman to have played regularly at the “Big Game” at Bobby’s Room, and the high-stakes cash games at Bellagio. She is also a regular player in “The Corporation”, which is a team of high-stakes poker players which participated in Andy Beal for limits up to $100,000 or $200,000.

Harman didn’t stop, she went on to participate at the GSN series High Stakes Poker and on the NBC series Poker After Dark, and she won one of the week’s tournaments. At the inaugural World Series of Poker Europe, Harman came second after losing in the HORSE event to Thomas Bihl.

Harman’s total live tournaments winnings exceeded $2,700,000. However, $1,022,174 of her total winnings came from the cash-outs at the WSOP. Even though she is regarded as a prestigious player, most of her earnings came from playing high-stakes cash games.

Jennifer Harman  Bracelets at the WSOP

A few videos from Jennifer Harman

The last changes of the page “Jennifer Harman” was made by Lawrence Damilola on December 26, 2020