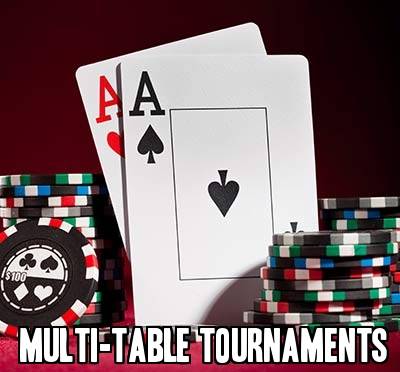 Poker tournaments are where champions are crowned and history is made. A WSOP gold bracelet is a milestone on my poker professionals careers and can’t be won at even the biggest cash games but only by outlasting a large field of players and proving themselves the strongest – or luckiest!

Online poker may not offer the same opportunity to don your sunglasses and stare down an opponent after putting them all in but there’s still plenty of tournament action for those looking for it. Whether it is a turbo micro-limit heads-up tourney or a high roller Sunday major, all tournaments share the same basic concept – a field of players sit down to compete for a prize pool, blinds increase and each player works to grow their stack and knockout their opponents until only one final winner remains. That winner will take down a nice payday but generally a the top finishers (usually 10% to 15%) take home some cash as well.

Typically to generate that prize pool, each player pays a “buy-in” to enter the tournament plus a smaller entry fee that goes to the poker room to cover the costs of the tourney and ongoing promotions. Freerolls are an exception to this and will be covered below. Those combined buy-ins either meet (or exceed) the minimum guaranteed prize pool but even if not enough players pony up the entry fee to meet the guarantee, the prizes pool stands. We’ll cover this more under overlays below.

The attraction of online poker tournaments

Online poker tournaments are quite popular and a favourite of many recreational players. Tournaments require players to use a different poker styles through the stages of the tournament and provide a great and fun way for players to learn and improve there game. They are an easy way to hit a large payday on a relatively small buy-in.

With the current online poker boom, there’s never been an easier time to log on and find a decent prize pool for whatever your limits, formats or blind speed you prefer. While cash games may run 24/7 as well, with tournaments you are only risking your buy-in so if you’re keeping a close watch on your bankroll — or are prone to tilt after a bad beat — now may be the time to make the switch to tournament poker.

In this most basic and traditional form of poker tournaments, players ante up their buy-in and get sat down at the tournament table with the same starting stack as all other other entrants. Tournament play continues normally until all the chips are gone (or won). Being a freezeout though, once that happens, the player is eliminated – there’s no second chances. Many players opt for a rebuy or re-entry tournament to allow multiple shots on goal.

Virtually identical to the freezeout tournaments above with the minor tweak that if a player is eliminated during the late registration period (usually visible on the tournament lobby), there’s an option to get back in the tournament by paying the initial buy-in again and receiving the same amount of starting chips. Some sites have limits on the number of times you

Here the name says it until. Unlike a freezeout, in a rebuy, a player has the opportunity to consistently reload their chips either when they lose them all or in many cases once they drop below the starting amount. Each of these rebuys tend to cost the same as the initial buy-in and are permitted during the rebuy period (normally very similar to the late registration period shown in the tournament lobby).

These tournaments get their popularity from players being able to take advantage of the rebuy period to loosen up their game in the hopes of building a monster stack to dominate the tournament. Stacks and prize pools can grow rapidly in this format and due to the high variance of the rebuy period, entrants should generally be prepared to fire more than one bullet — even the best hands can lose on a four way all in hand.

Many rebuy tournaments also feature an add-on option at the end of the rebuy period. For another buy-in, players can top up their stack even further. Because of this, rebuy tournaments tend to be very deep stacked and a final table can be many hours away from the start.

One of the fastest growing additions to the tournament menu in the past few years has been bounty tournaments. In a bounty tournament, a portion of the buy-in goes to the prize pool and the rest becomes a bounty on that poker player. Knockout that player in the tournament – win the bounty. The biggest advantage to this format is the flexibility to earn money not only by grinding a path to the final table but also along the way with player knockouts.

While often the buy-in for a bounty tournament is split 50/50 between the prize pool and bounty, always check the tournament lobby to be sure since the correct strategy could change depending on the split. Another element of the knockout format to watch for is if the bounty is normal or progressive. Knock out a player with a $5 bounty and the full amount goes to the hand winner but in a 50% progressive format, a player would win $2.50 up front and the other $2.50 would be added to their bounty. These progressive bounties can grow fast and make for interesting decisions late in the tournament where a knockout can be worth more than moving up the pay ladder.

Bounty and knockout tournaments have become incredibly popular for poker grinders and recreational players alike. It’s an easy format to earn back the buy-in on a bounty or two and then go for glory on a final table run!

Free money. Two words that everyone, not just poker players, enjoy hearing. Freeroll tournaments offer players a chance to compete for a prize pool without having to pay a traditional buy-in. Poker sites run freeroll tournaments either as part of ongoing promotions to reward loyalty or often will offer tickets to new players as part of a welcome bonus.

Prizes in freerolls tend to be somewhat smaller than a normal buy-in tournament and often can be given out in tickets to other tournaments instead of cash. Either way, keep a lookout for freeroll tournaments — particularly exclusive ones through YourPokerDream — as they are an easy way to grow a new (or struggling) bankroll.

Winning these tournaments won’t earn Satellite tournaments are simply qualifiers for other tournaments or events. The prizes might take the form of hotel and buy-in packages for a poker festival in Vegas, for example, or a big money online event. More typically, in terms of day to day poker, an online poker room’s schedule will be packed with satellites for all manner of tournaments, the point being to provide players with the chance to qualify for tournaments with buy-ins that would normally be more than their bankrolls allow for.

The prize structure of satellites though mean the aim for players is a bit different from a typical tournament. For example, in a 25 seat guaranteed satellite to a $100 Sunday Major, finishing in 25th place and first place gives the same prize – an entry to the target tournament. As such, the overall strategy – particularly around the bubble – is different and a bit more similar to a 50/50 SNG tournament.

Log on to any poker site and the featured tournaments will be there with a guaranteed prize pool. While the poker sites are generally strategic with the guarantees and many final prize pools exceed what was initially offered, occasionally a savvy poker player will come across a tournament where the buy-ins from the players total less than the guaranteed prize pool. The difference in those amounts is known as an overlay.

While tournaments with an overlay are not the best news financially for the site operator, they do offer a keen-eyed player the opportunity to compete for a larger prize pool against a smaller field than expected. 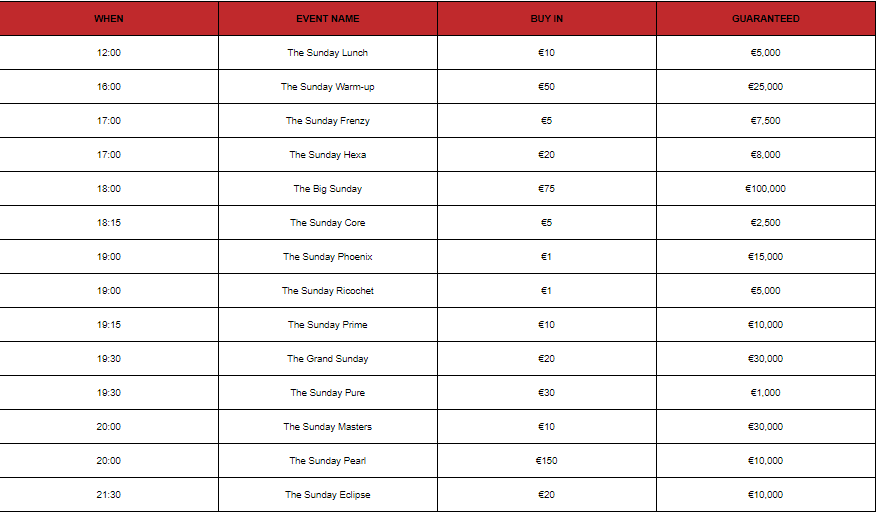 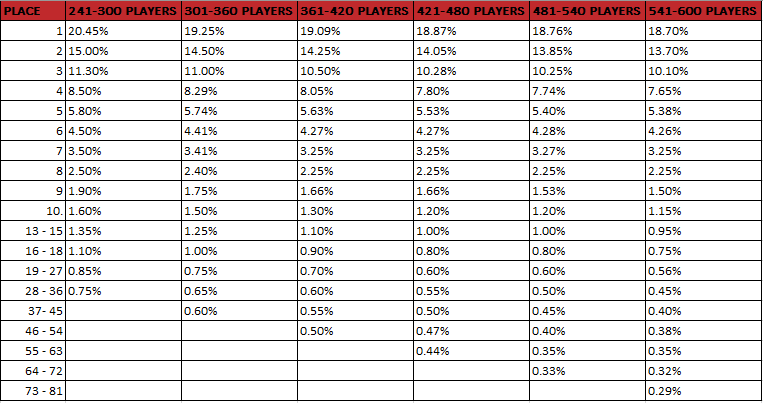 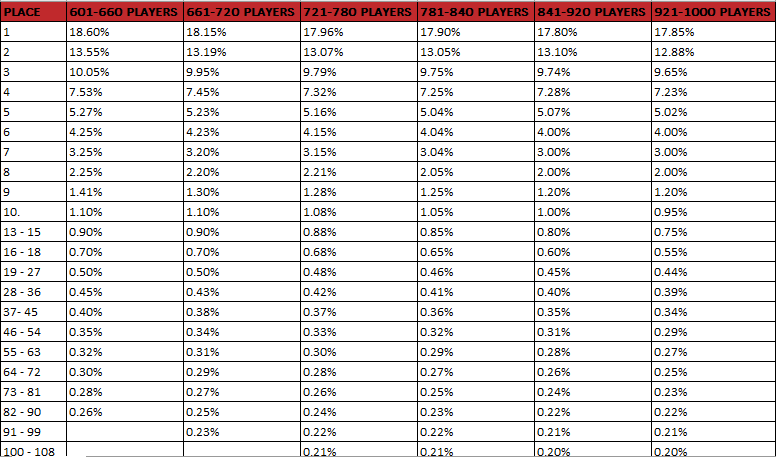