Is Poker Skill or Luck?

Home » Poker Online » Poker Strategy » For Beginners » Is Poker Skill or Luck?
Is Poker Skill or Luck?Daniel Berger2021-10-29T14:52:24+02:00
Author:
Daniel Berger
Hi Guys, I am Daniel the chief content manager of YourPokerDream.
I have been working in the poker industry for almost 10 years now.
I do my best to keep you all up to date regarding our partner sites
all promotions and about general poker topics arround the world. 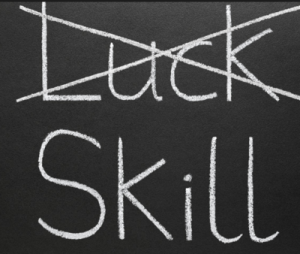 Is Poker Skill or Luck?

The question of whether poker is skill or luck continues to be the subject of great debate. Crucially, there is much more to the argument than many might first assume, as a definitive answer can have serious legal implications. If the game is seen as luck, for example, then it falls under gambling laws. If it’s deemed to be skill, then it can’t be regulated by casino laws.

It seems that there are strong proponents for each view, thus creating countless lively discussions from bricks and mortar poker rooms to the internet. Given the fact that companies could be potentially susceptible to paying hefty fines if found in breach of the law, the skill/luck distinction can be of paramount importance to a lot of people whose livelihoods revolve around the poker industry.

According to lawyer Jeff Philips, “…the issue of whether skill or chance is the dominant factor in the game of poker has never been litigated with the presentation of evidence in the U.S.”
Such legal issues depend on state or country laws as well as definitions of gaming and gambling, so there may never be a universal answer.

Why Poker is a game of Skill

Another salient comment comes from a blog post by silentarchimedes, who argued that there are many similarities between poker and investing in the stock market.

In economics, speculation is the villain and investing the hero. Speculation is associated with gambling and is considered to be a non-productive activity – sometimes even harmful to the economy. Investing, on the other hand, is considered a noble endeavour requiring skill and intelligence; it can be interpreted as serving a higher purpose by virtue of being ‘better’ allocation of capital.

But when it comes to investing in stocks, how much gambling is involved, and how much skill? The financial events of 2008 demonstrate, in fact, a tremendous level of gambling and suggests that, similar to poker, both luck and skill have been considered relevant factors.

The existence of thousands of poker pros

Another simple argument that for many is a concrete indicator of skill being not only an integral part of poker but, crucially, the main ingredient, is to point out that there are many thousands of professional poker players. Even if we take into account that a number of these might be from a younger generation who cannot as yet attest to the long-term viability of poker as their only source of income, the nature of online poker today is that of volume, and numbers speak for themselves.

Professional online poker players can play countless more hands over a few years than the old guard Bricks & Mortar pros managed in a lifetime. And anyway, the fact that someone like the great Doyle Brunson, whose poker career spans decades, managed to live very nicely from the game for 50 years can’t be ignored, either. One could be forgiven for thinking that such numeric evidence that skill is the ultimate factor in determining success in poker is overwhelming…

Another argument was developed by a Dutch Professor of Statistics who created a scale to rank games depending on how much luck or skill is involved.

… where ‘learning effect’ is the difference between an optimum player and a beginner. Based on this scale using values from zero to one, poker scores 0.4 and ranks at the same level as chess. Note that chess, incidentally, is increasingly viewed around the globe as a sport.

By the way, have you ever met a professional roulette player?

This question might be interesting to some, but to many – including those with even the slightest involvement or interest in poker – it is quite unjustified given the above. Unfortunately, taking the US as an example, the legal answer to the question could add (or not) literally billions of dollars in revenue to the online gambling industry because games of skill are considered legal by US laws, whereas gambling is prohibited. Equally, it could jeopardize the hobby of millions of American players.

If you have not yet done so, join the Poker Players Alliance, which represents all poker players around the globe. It lobbies US Congress intensely to pass the message that poker depends mostly on skill. If you play poker, or even if you agree that it is essentially a game of skill, then please join this organization that fights for our rights.

Three recent court decisions may have a profound effect on the skill/luck debate. And, by the way, it does not matter if this is Fixed Limit Hold’em, No Limit Hold’em, Pot Limit Omaha or Stud – all these poker variations are very similar as far as the skill and luck balance is concerned.

A lot has been talked about a ruling in Pennsylvania, during a case regarding gambling charges against a home poker room, which determined that poker is a game of skill. The judge used four criteria to dismiss the charges.

This is the first case where the judge looked at recent studies and arguments such as those mentioned in the previous section. It is also the first case where Texas Hold’em was considered a game where skill predominates over chance. Therefore, it is not considered “gambling” under Pennsylvania law (as well as many other States).

The second ruling happened in Kentucky, where the Court of Appeals rejected the State’s attempted closure of 141 Internet domain names. Many of them were poker portals. This decision was appealed to the State Supreme Court.

A third ruling was debated in February 2009 in South Carolina, but the Judge, Larry Duffy, declared that he had determined that Texas Hold’em was a game of skill. A strong argument was made by the late poker legend and WPT commentator, Mike Sexton, who was brought to testify by the Poker Players Alliance.

Another important development was the election of President Barack Obama, himself a poker player. He ordered the freezing of all last-minute laws from the Bush Administration, one of which being the ratification of the infamous UIGEA. For reference, we discuss the UIGEA in more detail in our article about poker legality.

It seems that the scales of justice are starting to tilt in the right direction that, of course, Texas Hold’em Poker is a game of skill. Online poker has indeed been such a success because it is a perfect blend of skill and luck. If it involved ‘too much’ skill it would be like chess, meaning that beginners would never stand a chance against superior opposition and would therefore not pursue the game, or even – being aware of this truism – not bother trying at all. If the luck factor were more significant, on the other hand, it would effectively relegate poker to the same level as games of chance such as roulette, the lack of the skill element removing for what poker fans is ultimately the main attraction, and which draws so many players to the game because of that very distinction.

If you are new to poker and until now have not been certain that it is indeed a game of skill, then that is perfectly understandable. This is exactly the type of question you should ask yourself. The best answer is to play and study poker…